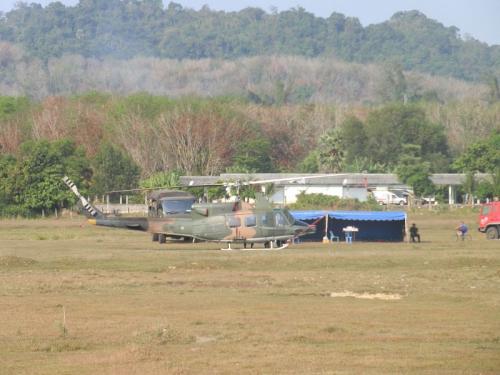 PHUKET: A rapid loss in oil pressure forced the pilots of a Royal Thai Army helicopter to make an emergency landing in a field in central Phuket yesterday.

Thalang Police were alerted to the emergency landing by villagers in Baan Pru Champa.

“The helicopter belongs to the 2nd Air Mobile Company in Nakhon Sri Thammarat. There were two pilots and two mechanics on board,” Thalang Police Deputy Superintendent Amnuay Kraiwutthianun told the Phuket Gazette.

“One of the pilots noticed smoke coming from the engine and alerted the other pilot. They tried to maintain good control of the helicopter and finally landed safely,” he explained.

“The smoke came from an oil leak. There was no fire,” Lt Col Amnuay added.

Sgt Maj Pratheep Wongsawan and his team of engineers were dispatched from the Royal Thai Army base in Krabi to repair the helicopter.

“We are checking and fixing it now. After the repairs are complete, the helicopter will be flown back to Nakhon Sri Thammarat,” Sgt Pratheep told the Gazette this morning.