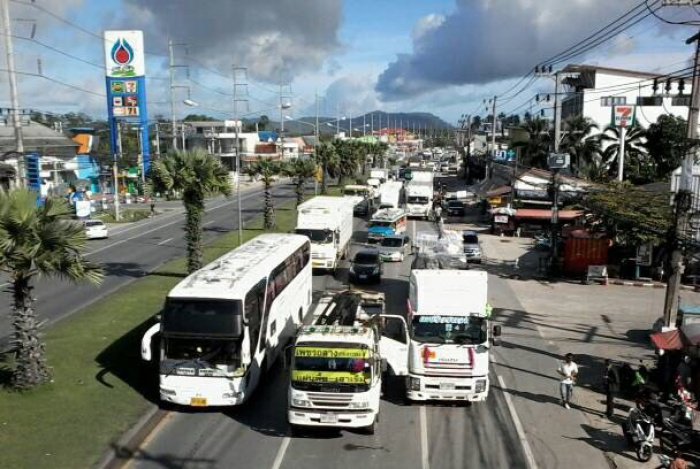 PHUKET: Two road-raging truck drivers were in an intentional crash on Thepkasattri Road, the north-south artery of the island, causing long tailbacks for about an hour this morning.

“Suriya Kuiyoksui, a 35-year-old driver of an 18-wheeled-truck, flung open his door to ensure a minor crash with the driver of a six-wheeled crane truck. The men immediately exited their vehicles and began arguing,” explained Thalang Traffic Police Chief Boonserm Srimora.

The trucks remained in the middle of the road blocking traffic as Mr Suriya and Wisut Sutcharittham, 32, argued.

“It took us almost an hour to get traffic back to flowing normally,” Lt Boonserm said.

The men were taken to Thalang Police Station to be questioned.

“They both explained that they started overtaking each other at the Tesco Lotus in Thalang. Then they started honking their horns. Eventually, when they arrived at the PTT gas station where the accident occurred. Mr Suriya said he was so angry that he opened his truck door to hit Mr Wisut’s truck,” Lt Boonserm said.

Both men were charged for having a violent argument in public and obstructing traffic, Lt Boonserm confirmed.

“I would like to advise all drivers to be sensible and avoid road rage. When you are arguing with another driver in public like this, it can affect a lot of people, not just you,” Lt Boonserm said.

Phuket nightlife venues to push ministry for 4am close