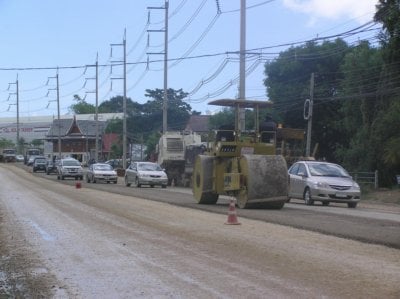 Project contractor SCG Construction Company Ltd is currently working on two stretches of the road. The first starts just south of the Darasamut/Central Festival Intersection and ends approximately 1.5 kilometers south of that, near Phromphan supermarket. The second section starts just a few hundred meters further south and ends at the intersection with Kwang Road.

The roadwork is causing congestion not only on Chao Fa West Rd, but also on Chao Fa East Rd, which many motorists are using to try to avoid the dust, rocks and traffic jams.

PPHO officer Parnumart Junkhun told the Gazette that the works are part of a PPHO project to resurface and widen the entire road, all the way to Rawai Beach, by March 6 next year.

The work follows the recently completed widening of the bypass road, which joins Chao Fa West Road at the Darasamut/Central Festival Intersection. Upgrading the road from the intersection to Chalong Circle will cost an estimated 128.6 million baht, K. Parnumart said. Improvements from the southern roundabout to Rawai Beach will cost an additional 131.6 million.