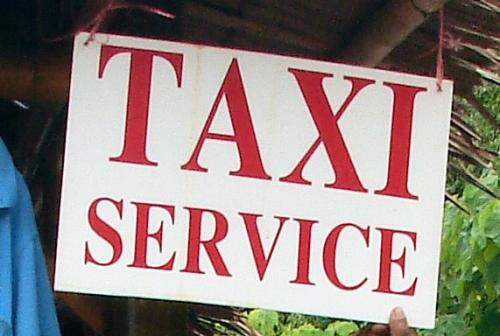 PHUKET: Taxi fares are set to rise in Phuket in an attempt to thwart the illegal-taxi trade and to provide legitimate taxi drivers with a decent standard of living.

“We will increase taxi fares as part of our campaign to solve the problem of taxi-driver cheats in Phuket,” said Phuket Vice Governor Chamroen Tipayapongtada.

“If the standard fares rise, taxi drivers will have more incentive to use meters instead of charging flat rates,” he told the Phuket Gazette.

The news follows Vice Governor Chamroen chairing a meeting at Phuket Provincial Hall yesterday that targeted the problems that have arisen from the excessive and embarrassing taxi fares that are charged in Phuket.

“We receive more than 10 complaints a month from people telling us that metered-taxi drivers in Phuket do not charge standard fares, and they differ in the levels of service they provide,” Phuket Land Transport Department Chief Terayout Prasertphol told the Gazette.

“That encourages tourists – and residents – to not use taxis. This is a big problem and it will affect Phuket’s tourism [industry],” he said.

Mr Terayout explained that three new rates had been decided on, and will be proposed for use in Phuket.

“All of them are under the rates set by the Department of Land Transport,” he said.

The rise in taxi-fare rates will be the first Phuket taxi-fare adjustment since 2003, Mr Terayout pointed out.

“This rate is not fair when when one considers today’s cost of living,” he said.

“There have been many complaints from taxi drivers about the fares being too low compared with today’s living costs. The proposed increase is a good solution for existing taxi problems,” Mr Sutin said.

Mr Terayout added, “Taxi drivers on Koh Samui charge higher fares, but they have fewer complaints about drivers cheating. Therefore, we believe we are taking the right course of action.”

Vice Governor Chamroen noted that four teams of officers had been deployed to act against taxi-driver cheats.

“This will benefit passengers and the drivers. It will also help improve our standards and the image of metered-taxi drivers in Phuket.

“We will move to have all taxis in Phuket fitted with meters in the future,” he said.