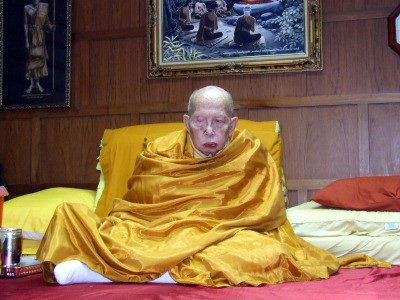 The secret to the aged monk’s longevity is to “eat less, speak less and always speak the truth”.

Having just returned from a five-day pilgrimage to Medan, Indonesia with his aides, the aged monk is “tired”, but looking forward to his landmark birthday celebrations, which will take place at his temple, named after him, in Chalong on September 16 and 17.

Although Luang Pu Supha is not recognized by Guinness World Records as the World’s Oldest Living Man, for many of those closest to him, he is actually celebrating his 116th birthday.

His birth certificate, claimed to have been issued two years after he was born, reads September 17, 1896.

This would make him either four days – or two-years and four-days – older than American Walter Bruening, currently recognized as the World’s Oldest Living Man by Guinness.

All his official identification documents, including his current house registration and ID card, show that he is four days older than the American, unofficially making him the World’s Oldest Living Man.

One of Luang Pu Supha’s closest aides and temple committee members, Kriangsak “Ko Keng” Suksoomboon said, “If Guinness World Records would like to come to prove his age, then this would be a good thing, but we will not pay for that.”

To verify such a record, a Guinness verification expert would need to come to Phuket.

Before Luang Pu Supha left for his trip to Indonesia, the Gazette was granted a private audience with the revered monk and Ko Keng in his quarters.

Luang Pu Supha was in good spirits about his trip and upcoming birthday celebrations, but had a little difficulty with hearing. He spoke to the Gazette with the help of Ko Keng.

“His body is strong but inside he is getting old now,” said Ko Keng.

Luang Pu Supha avoids spices and salts in his diet, but is said to have a sweet tooth, his favorite dessert being khao neaw kaew (sticky rice with sugar).

Recently Luang Pu Supha was admitted to Siriraj Hospital in Bangkok to receive treatment for an “enlarged heart”, but has been recovering well, he added,

The supercentenarian birthday celebrations will begin on September 16 and continue the next day.

Luang Pu Supha plans to release 119 birds as well as award 139 scholarships before members of the public will be invited to pay their respects at 1pm on his birthday.