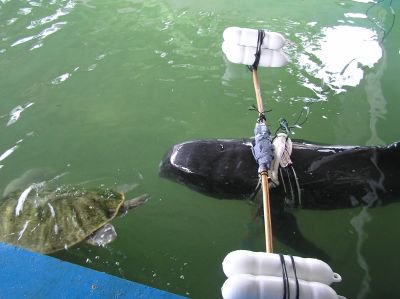 PANWA CAPE: A rare Risso dolphin, at first thought to be a melon-headed whale, has died at Phuket Marine Biological Center (PMBC) after rescuers fought to save the life of the beached creature. Kongkiat Kittiwattawong, a biologist at the center, told the Gazette that the 2.6-meter adult female died about 5 am on Thursday. She was in a pool meant for turtles and had been fitted with floats to prevent drowning. “We gave her medicine and tried to feed her some fish,” K. Kongkiat said. “She chewed but didn’t accept the food. At her age, she should have weighed 200-250 kgs but she was underweight, at about 100-150 kgs.” Biologists believe she had gone without food for several weeks and K. Kongkiat said an autopsy showed the dolphin was too sick to save. “We found almost 100 % of the lung tissue was damaged,” he said. “She had internal parasites and her organs were breaking down.” The turtle pool at the PMBC is not large enough for creatures of this size and K Kongkiat said there were plans to build a larger tank as soon as 2 million baht needed can be found. Appeals to the government for the money appear to have fallen on deaf ears, but the death of the dolphin had at least created media interest and highlighted the need for better facilities, he said. The animal was found by tourists on Karon Beach on Tuesday evening.