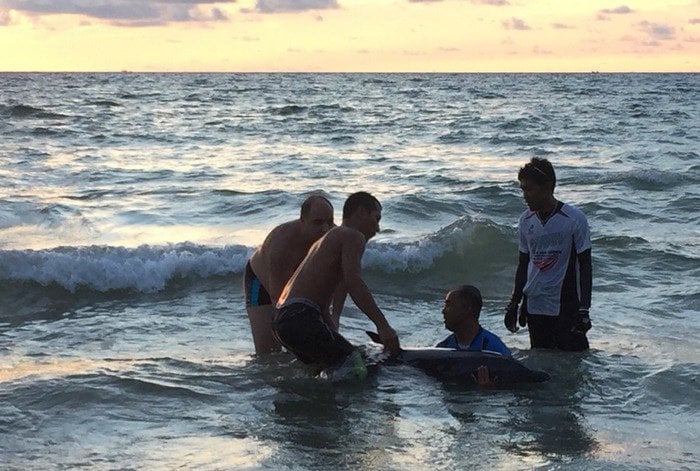 PHUKET: A striped dolphin spotted close to shore at Bang Tao Beach died last night, despite rescue workers’ and experts’ efforts to save the marine mammal.

Kusoldharm Foundation rescue workers arrived on the scene in front of Sunwing Resort and Spa at about 6:30pm to find tourists attempting to keep the dolphin from beaching itself.

As the dolphin was weak, experts stopped at Thalang Hospital to give the dolphin saline solution. However, the animal died on arrival.

“We could not save it. It was too weak and too sick,” said Kongkiat Kittiwattanawong, head of the PMBC Endangered Species unit.

Striped dolphins (stenella coeruleoalba) are often found along the Andaman coasts of Phang Nga and Phuket. A typical pod comprises about 50 individuals.

“This dolphin was probably separated from its pod because it was weak and couldn’t deal with the strong sea conditions,” Dr Kongkiat explained.

“This type of dolphin is often dismissed from their pod and swim close to shore to prevent the rest of the pod from catching their disease.”

Experts at the PMBC are examining the dolphin to determine the cause of death.