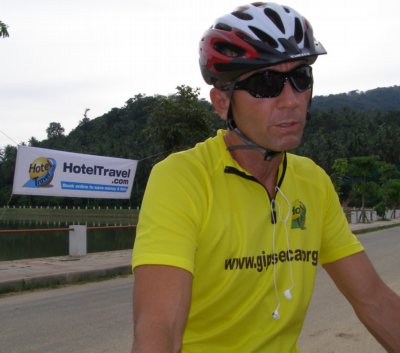 PHUKET: Luxembourg national and local environmental activist Marco Reinard is due to complete his 24-hour solo mountain bike marathon ride around Phuket at 4 pm today, arriving at Yoonique Stone bar, Nai Harn, the same place he set off from yesterday.

He set off on his mountain bike ride at 4 pm yesterday and should complete the ride at 4 pm today, having cycled 400km in 24 hours.

After his non-stop bike ride but before tucking into some well-earned refreshments, Marco is expected to announce his next project in November: a 5,000-mile journey from Burma to Taiwan on a custom-made Hobie catamaran.

Marco will be sailing with a Burmese sea gypsy that he befriended earlier this year and plans to complete the wind-powered trip in 100 days.

Marco’s environmental-awareness endeavors are sponsored by HotelTravel.com, who are providing the funding and equipment needed.

In July, Marco circumnavigated Phuket in a kayak, covering almost 200 kilometers in less than 20 hours. The journey was physically grueling and dangerous as he endured the strong waves common this time of year.