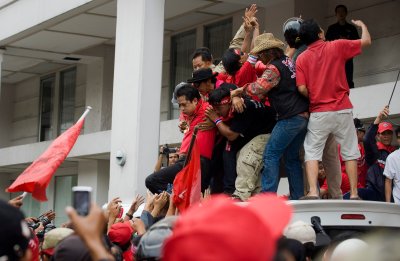 PHUKET: Most Phuket Gazette readers believe the red-shirt rallies in Bangkok have had a negative effect on the island’s tourism industry, according to the results of our latest poll.

With 615 readers casting votes, nearly two-thirds (64.4%) think the demonstrations in Bangkok have damaged tourism to Phuket, despite some earlier industry suggestions that Phuket, as a peaceful destination, could benefit by catching runoff from tourists re-routing from Bangkok.

A clear majority of expats (66%) and tourists (69%) view the red-shirt protests in Bangkok as having a negative effect on Phuket, while less than half of Thai nationals (44%) hold such views.

Thai nationals tend to have a more confident outlook, with 27% saying Phuket has been positively affected and 29% saying there has been no effect.

Much lower percentages of foreign residents and tourists (14% each) say the turmoil in Bangkok has had a positive effect on tourism, while 21% and 17% respectively say there has been no effect.

Phuket a super-star for hotel performance