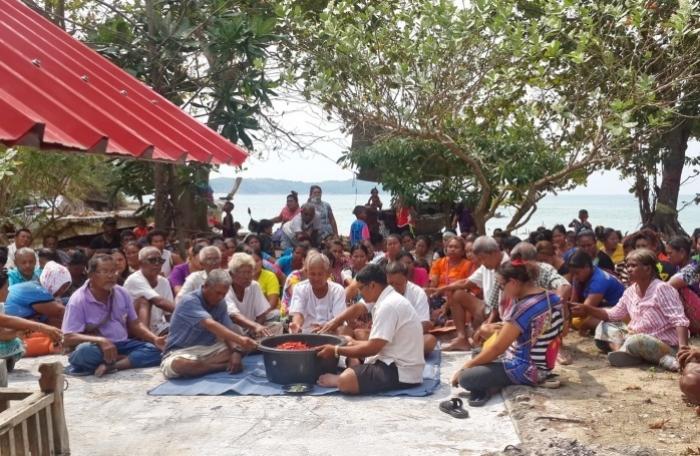 PHUKET: The Rawai sea gypsies have turned down the provincial government’s offer to purchase 19 rai of disputed land (story here), insisting that the land deeds must be revoked entirely.

Reasons for the most recent refusal in the prolonged land dispute between landowners and the sea gypsies were that the sea gypsies believe the land deeds were unlawfully acquired so they are demanding that the Land Department revoke them first, confirmed sea gypsy community leader Ngeem Damrongkaset.

The area that Phuket Province intended to purchase for the seafaring nomads was a 19-rai plot, which had already been inspected by the Department of Special Investigation (DSI) and proven to have been the gypsies’ home for more than 100 years (story here).

“It is clear that the land was ours and we have a rightful claim to it, so we do not agree with the province’s proposal to buy the land,” Mr Ngeem said.

Preeda Khongpan, a member of a government-appointed advisory panel on how to best restore and maintain the traditional sea gypsy way of life, stated that the province’s plan to purchase the disputed land was unclear.

“There were no details at all on how the province would buy the land from the landowners. It would have to be passed on to the Cabinet for consideration, as they would be using the country’s money to purchase this land. And if the land is bought using the land bank mechanism, the sea gypsies will have to pay back the debt to the land bank in installments, which they will not agree to,” Ms Preeda explained.

“It would be inappropriate to buy this land, as the DSI has already proved that the land belongs to the gypsies and the Land Department should just do their job and revoke the land deeds.”

She suspected that the offer was just a plan by landowners to avoid losing the land outright.

The offer was presented by Phuket Governor Chamroen Tipayapongtada on Monday. He said the province would coordinate with the Social Development and Human Security Ministry to acquire 19 rai of contested land from private owners to develop housing for the sea gypsy community with a budget of 313 million baht.

Meanwhile, in the conflict over 33 rai of land owned by Baron World Trade Company, which has laid claim to a religious site traditionally used the sea gypsies and the access way to the beach, Governor Chamroen said that the province has set up a team to measure the disputed access way, about three meters wide, and asked for three more meters of land to create a wider path (story here).

Mr Ngeem said the sea gypsies had also turned down this offer from the provincial government and insisted on using the original way to the shrine and the beach through disputed land.

“We urge the Land Department to inspect the land deed of this plot as well. We do not mean to reclaim all of the land, but we want our original path, the shrine and the beach access to be excluded from this plot of land,” he said.

Meanwhile, following investigations into the assault on the sea gypsy community in which more than 30 people were injured in a violent confrontation between private investors and sea gypsies (story here), 14 arrest warrants have been issued for representatives of Baron World Trade. Six suspects have already surrendered and been released on bail.

US Embassy to hold consular outreach in Phuket