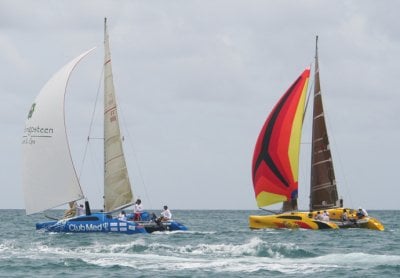 PHUKET (The Nation): Good winds of up to 20 knots gave the third annual Evason Phuket Race Week a great start as the first day’s racing got underway off Rawai yesterday.

More than 30 boats, a record number for the regatta, started in almost perfect sailing conditions off The Evason Phuket, with the wind averaging about 14 knots, gusting to 20 knots.

Seven classes of boats are racing this year, from big keelboats in the IRC1 class to the 100-year-old Seraph in the classic class.

The hotly-contested sportboats class was still in dispute last night over handicap ratings, which should be determined today after consultation with international sailing authorities.

Thailand-based skipper David Lindahl showed local knowledge counts when he helmed his boat La Samudra into first place in the first race in the IRC1 class.

Lindahl finished just in front of John Vause’s Ruby Tuesday in the first race, but Vause turned the tables and finished in front of Lindahl in the second race in the afternoon.

The talk of the regatta is the new Firefly catamaran, which was designed and built in Phuket. A pair of Fireflies are taking part this year and very little separated the two after the first two races in the multi-hull performance cruising class yesterday.

Chi Machine, which was launched only a few days before the regatta started, won both races by very small margins, beating Moto Inzi, into second place. John Stall’s catamaran Charro was beaten to third place in both races.