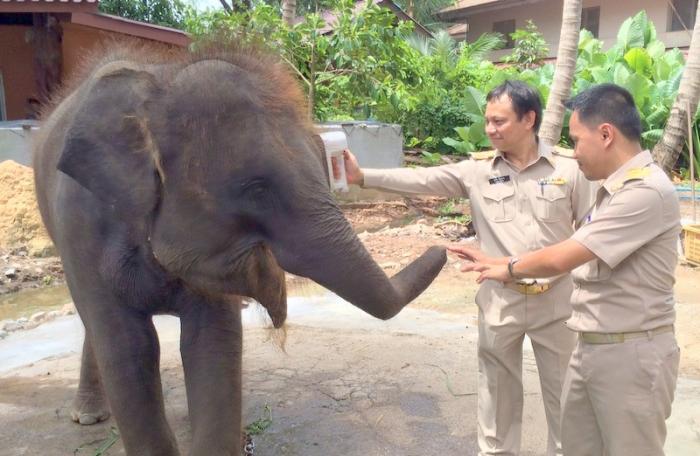 PHUKET: The Phuket Provincial Livestock Office (PPLO) has quarantined a baby elephant found on Bangtao Beach after her owner was charged yesterday for moving the animal to Phuket without a proper permit.

Livestock officers moved the six-year-old pachyderm named ‘Nang Chok’ after tourists and locals expressed concern for the animal’s well being.

“Boonchu Rattanadilok Na Phuket, the owner of Nang Chok, does not have the proper documentation for moving the elephant to Phuket,” PPLO officer Surajit Witchuwan told the Phuket Gazette.

“The elephant was transferred from Surin Province to Phang Nga before being moved to Phuket, but Mr Boonchu did this without the permission of a local veterinarian,” Mr Surajit said.

Mr Boonchu was charged under section 34 of the Animal Epidemic Act, which states that: “Any person moving elephants, horses, cattle, buffaloes, goats, sheep, pigs, their embryos or semen for breeding purposes, animal carcasses or any other kind of animals specified in ministerial regulations, to [another] provincial area shall first obtain a permit from the local veterinarian concerned.”

“The PPLO is currently keeping an eye on Nang Chok at a facility in Talad Yai in Phuket Town for the next 30 days to ensure that she is in good health. After that, Mr Boonchu and the elephant must leave Phuket,” said Mr Surajit.