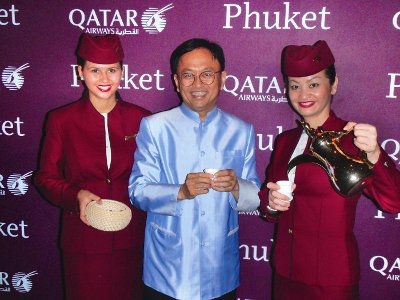 PHUKET: A new daily flight connecting Doha and Phuket is set to benefit the island in a number of ways, including improving travel options among European tourists wishing to holiday in the Andaman region.

The first Qatar Airways flight from Doha, with a stopover in Kuala Lumpur, landed in Phuket on October 12.

Phuket is one of nine new destinations added in the past year by the carrier, with hopes to add another 120 destinations in the next three years as part of its aggressive expansion strategy.

“In a radius of only five hours flight time from Doha, there is a population of over three billion people, and this is what we will tap.

“Doha will serve as an excellent gateway for you, connecting Phuket to key cities around the world.” he added.

According to Mr Al Baker, the increased accessibility of Phuket to the rest of the world will help boost tourism, particularly since Doha’s central location makes it an ideal hub.

Popular connections for the Doha – Phuket route include Western European cities such as London, Stockholm, Berlin, Moscow as well as cities in North and South America.

The carrier hopes the new service will increase its inbound passenger load to Phuket from 200,000 last year to 300,000 this year.

“Phuket is a favorite destination from the Middle East and from passengers that fly with us from Europe,” Mr Al Baker said.

Suvat Chirapant, the Thai Ambassador to Qatar, said Middle Eastern tourists look to holiday destinations in Asia during the harsh summer months there.

“Previously Florida was the top choice, but after 9/11 it has been harder for them to get visas and they don’t feel as comfortable going,” he said.

Medical tourism is also another sector of the local economy that is set to benefit, Mr Al Baker said.

Thailand is already the number-one destination in the world for this niche market [among Middle Easterners], said Mr Al Bakar.

He has been working with Mr Suvat to promote it further, he said.

The first ever medical tourism roadshow in the Middle East was held in Doha last month.

The new direct route will give Phuket a competitive edge over other medical tourism destinations in Asia, including Singapore and Korea.

“Medical services in Qatar are expensive and there is a certain lack of expertise, so medical tourism is a selling point for Middle Eastern tourists,” Mr Suvat said.

When asked whether the route will be popular with Thais wanting to holiday in Qatar, the ambassador was skeptical.

He cited the harsh climate and lack of natural attractions in Qatar as an obstacle.

“It is more of a business or MICE [meetings, incentives, conventions and exhibitions] destination, rather than for leisure and recreational tourism,” he said.

In response to comments about layover times of up to eight hours for passengers transferring from European flights, Mr Al Baker said:

“We do realize this is an issue on many connecting flights, but as with everything we cannot satisfy every passenger. But it is for this very reason that we have increased the frequency of our flights to Bangkok, giving you another convenient option,” he said.

The Kuala Lumpur stopover that is currently part of the Doha – Phuket route will be eliminated as soon as more aircraft are available, he said.

“When this happens I am sure there will be massive improvements in the connections between European capitals and Phuket,” he added.