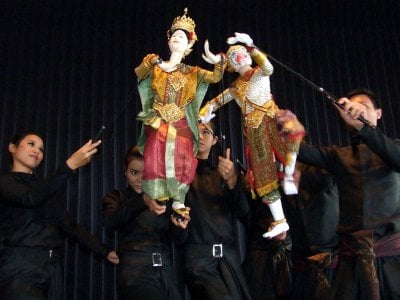 PHUKET: Bangkok’s loss is Phuket’s gain, as the Joe Louis troupe of traditional Thai puppeteers has a new home at the Jungceylon shopping complex in Patong.

For many years based at the Joe Louis Theatre in Bangkok’s Suan-lum Night Bazaar, the troupe now has a new home: the Joe Louis Thai Restaurant in the Sino-Phuket Zone at Jungceylon.

Diners there will be able to view the large collection of intricately detailed Joe Louis puppets now on display, all of which have been used in past performances.

There will also be twice-daily performances at the restaurant starting at 5pm and 8pm through until October 15.

There are plans to hold larger performances at the SF Cinema at Jungceylon starting in January.

Restaurant shareholder Wanchana Ponpalangkun said Phuket’s reputation as a tourist destination made it a perfect location to host the world-renowned troupe.

“I think combining the puppet show with a restaurant will garner a good response,” said the investor and brainchild behind the 5-million-baht venture.

The chefs, menus and much of the décor is from the Joe Louis Theatre in Bangkok.

“It’s a pity that these shows will no longer be available in Bangkok,” said Mr Wanchana.

Unfortunately, the Phuket venture cannot employ the entire Joe Louis troupe from the outset, he added.

To test the market, the twice-daily dinner performances of about one-and-a-half hours will run for one week. Tickets are 1,000 baht each.