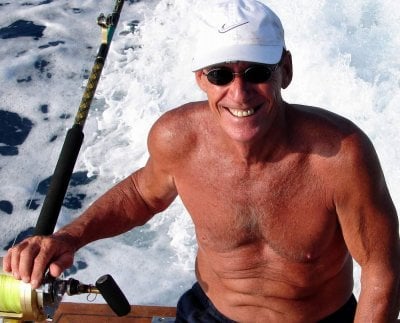 PHUKET: The final service for Nick Jackson – well-known for founding the popular Katoeys R Us bar in Patong, and more recently for his game fishing tours off Phuket – will be held at the temple across from Loma Park in Patong tomorrow morning.

Mr Jackson passed away in his sleep sometime last Friday night or Saturday morning, a family member told the Gazette.

Although he had been suffering a fever in the days before his death, Mr Jackson’s passing came unexpectedly as he was known for being healthy and lived an active lifestyle.

He was to celebrate his 61st birthday on Wednesday.

In his homeland Australia, Mr Jackson was well known for building Blackfin boats. He also had run restaurants on the Gold Coast and bars on Hamilton Island in Queensland.

After moving to Phuket nearly 12 years ago, he opened the famed cabaret restaurant Cocktails & Dreams, then went on to run successful bars in the Tiger complex on Soi Bangla.

“Nick was such a good-hearted man, a bigger than life person who will sadly be missed by loved ones and family in Australia – Amanda, and sons Sam, Trent and Drew – and in Phuket by Ning Nong, Sunny and Nong,” said one family member.

“His kind nature helped everyone, and on his birthdays, on October 6, he would raise money to support the Sarnelli House orphanage [for children affected or infected by HIV and Aids],” he added.

Friends are welcome to attend the final service tomorrow and are asked to arrive around 11am.