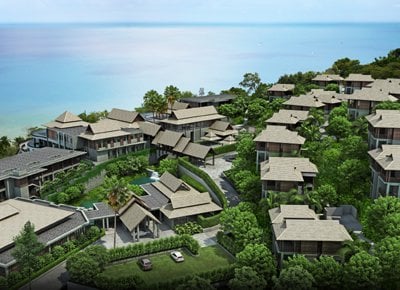 PHUKET: Construction of the five star Pullman Phuket Arcadia began in October 2010 on Nai Thon’s headland and with the project completion target date of August 2012 approaching, marketing and recruitment proposals are scheduled for the end of this year.

Mr Maitree Narukapichai, the project owner’s representative and managing director of Villa Zolitude Resort and Spa in Chalong, detailed the structure and concept of this upcoming development to the Phuket Gazette.

“The new Pullman Phuket Arcadia is being developed on 40 rai of headland in the Nai Thon area. There is 68 rai available, the remainder of which will be used for further development in the future,” Mr Narukapichai said.

The resort will comprise 281 rooms, including three styles of guest room – superior, deluxe and pool villa, of which there are seven. Each villa will have four large individual guest rooms over two storeys, and each room will have its own private facilities.

Of the seven private pool villas, six will have one bedroom and one will have two bedrooms.

“The resort is constructed on a cliff and we do not wish to spoil the natural aesthetic qualities, so the structures will not extend above three storeys,” Mr Narukapichai added.

International hotel management chain Accor will control daily operations, as with the Hilton Phuket Arcadia, and facilities will cater to both leisure and corporate market needs.

A 200-seat meeting room with three individual break-out rooms will cater to business events, as will a chill-out room, a new concept in Pullman branding that will enable further networking. In addition, an Accor connectivity lounge – situated in the lobby area – will enhance commercial communications.

Resort leisure features include a gymnasium, five individual spa treatment rooms, two swimming pools (one of which is Olympic-sized) and a kids club, while diners can avail themselves of three outlets: an all-day international cuisine restaurant, an Italian restaurant and a delicatessen.

“Luxury resorts must be able to adapt and be equipped to cater to all markets. During the high season, we will focus on the leisure market such as families and couples. In the low season, we can turn our focus towards MICE and more corporate markets,” Mr Narukapichai explained.

The project has a budget of approximately 1.5 billion baht and is utilizing established Thai companies for all aspects of the development.

Construction is being managed by Bangkok’s Powerline Engineering.

Habita, who have worked on many other projects around Phuket, including Sri Panwa and Anantara, have been employed as project architects and a contemporary Thai design style will be emphasized throughout the structure.

P49 DEESIGN are responsible for the interior design and are well known in Phuket for their influence on resorts such as Trisara.

P Landscape are contracted to shape the resorts exterior with notable examples of their work at the Paresa Resort and Malaiwana.

“I am confident in the collection of companies we have chosen to work with. Certainly, I consider our selections to be the lead in their respective categories in terms of experience, not only in Thailand, but also abroad,” Mr Narukapichai said.

With sustainable energy technologies and eco-friendly constructs now being incorporated into many large developments, the Pullman Phuket Arcadia will employ several options such as waste water recycling for their vast landscaping requirements.

“With the project aiming to be finished by August 2012, we hope to fulfill the needs of our target market and further enhance the goals and aims of tourism in Phuket,” Mr Naruapichai explained

Phuket Live Wire – Google in English online all the time