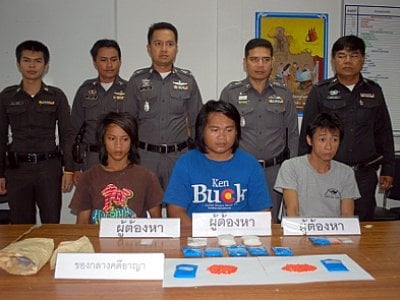 PHUKET: The arrests of two low-level Phuket drug users have led to the bust of their suspected methamphetamine dealer, who was allegedly caught with 1,400 ya bah (methamphetamine) stashed in his underwear.

Tipped off by an undercover agent, a team of police officers at 4:30pm on Monday investigated an area along Soi Mae Ampan, off Patak Road in Chalong, where teenagers supposedly met to buy and sell drugs, said Chalong Police Deputy Superintendent Narong Laksanawimol.

“Mr Narongrit, who was riding a motorbike, seemed suspicious to us. After identifying themselves as police officers, the team searched Mr Narongrit and found 200 milligrams of ya ice [crystal methamphetamine] on his person,” he said.

The police questioned Mr Narongrit, which led to the arrest of Mr Bualin at a rented house in Karon about an hour later.

Police searched the house and found 1.34 grams of ya ice in Mr Bualin’s pockets and 185 ya bah pills under the television table, said Lt Col Narong.

After questioning Mr Bualin, police believed that Mr Seksan would be delivering ya bah to the house and planned to arrest him on arrival.

“At 7:30pm Mr Seksan arrived at the house on a motorbike. The officers then identified themselves and searched him. They found 111.6 grams of ya ice and 1,400 pills of ya bah in his underwear,” he said.

Mr Narongrit, 19, and Mr Bualin, 40, both from Nakhon Phanom province, were charged with possession of a category one illegal drug.

Mr Seksan, 25, from Ubon Ratchathani province, was charged with possession of a category one illegal drug with intent to sell.