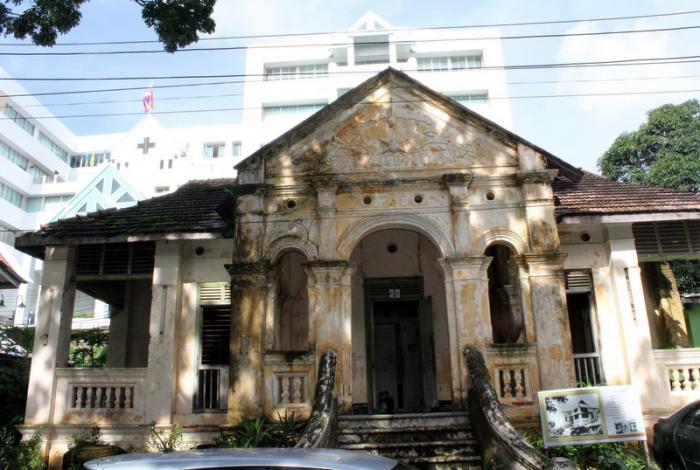 PHUKET: Public outcry over plans to demolish an eight-story, 100 year-old building, along with a grove of old mahogany trees, has lead management at Phuket Vachira Hospital to reconsider the development of a new hospital wing.

The issue came to public attention on August 25, when a Facebook user posted a statement in Thai.

“Vachira Hospital will demolish this 100-year-old building in order to expand its facilities,” the statement reads. “Locals are trying to help stop the project, but have too small of a voice to convince management to alter their plans. I would like to ask for help from experts, teachers, members of the media, officials and officers, as well as from the public in general. Help us share this news and put pressure on Vachira to stop the project. The building is old, and this kind of architecture falls under the protection of the Fine Arts Department. Therefore, those who are responsible for the demolition of the building should face legal charges.”

The issue further heated up on August 25, when a Vachira Hospital doctor submitted a complaint to the Damrongdharma center (ombudsman’s office), after he received no satisfaction following a discussion of his concerns with Vachira management.

“The new building, which plans for 298 beds, received a 303 million baht budget from Ministry of Public Health’s 2017 yearly budget,” Dr Veerasak said. “The management team first informed us that the new building will be built at the current site of the canteen and laundry area, which had been approved by a team from the ministry.”

“However,on July, Vachira’s director and deputy director stated that the building site would be changed to where the Ranong and Boontham buildings are located,” he said. “Both buildings date back to the period of King Rama VI and many old trees would also be destroyed for the new facility’s construction.”

Vachira Hospital’s Chief Engineer told the Phuket Gazette that the site of the development shifted due to logistical considerations.

“We’ve since surveyed both sites and the reason we changed our plans from the canteen and laundry area is due to the slope next to the parking area, which could affect traffic,” Chaiyot Thonglim said. “Another reason is that fire trucks would not be able to reach the area in the event of an emergency.”

Mr Chaiyot said that after receiving complaints, the hospital’s management is reconsidering the building site.

“We can agree with the new location if management can find a way to save the old buildings and trees,” said Dr Veerasak.

Vachira’s management team has reportedly come up with four possible solutions and is expected to choose one by September:

First, they could set up a committee headed by Dr Veerasak, joined by representatives from the Department of Fine Arts, the Forestry Department and the Ministry of Public Heath to decide the issue;

Secondly, they could enter into a discussion with the ministry, engineers and architects to see if there is any possible design that would respect the integrity of the old buildings and vegetation.

Thirdly, the wing could be moved to Chalong hospital, with doctors and nurses from Vachira working there instead; and finally, they could return the budget to the ministry.