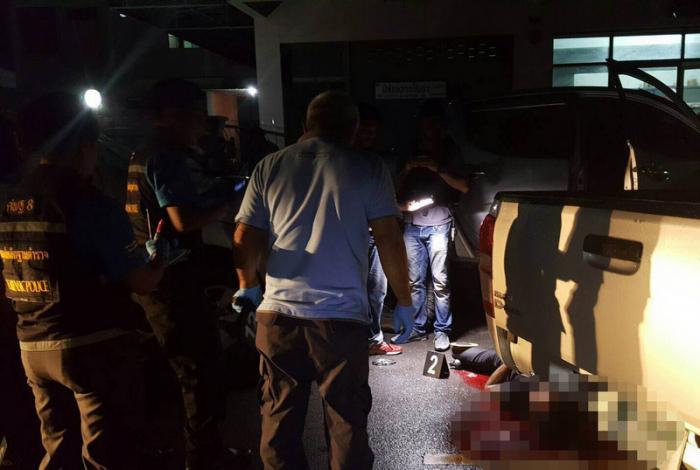 KRABI: An alleged Krabi “drug dealer” was shot dead last night after a police task force cornered him and he attempted to throw a grenade at the officers, the police say.

The suspect, who was the target of last night’s joint task force raid in Krabi Town, is named as Chanchaiyuth Krainara, 29. Police are reporting that Mr Chanchaiyuth was a “big-time drug dealer” in Krabi and Surat Thani provinces.

“Task force personnel assembled in front of the Panumas Apartments on Ruamjaichon Road in Krabi municipality around 9:30pm,” said Krabi Provincial Police Deputy Commander Boontawee Toraksa. “However, before officers engaged the suspect, we received a tip that he had a hand grenade or an explosive of some kind, so we closed the road to avoid endangering anyone else.”

Undercover officers posing as potential buyers attempted to surround and capture Mr Chanchaiyuth, who managed to escape and tried to break through the police blockade in a pick-up truck.

“In order to stop him, we shot his tyres multiple times,” Cmdr Boontawee said. “But, he didn’t stop, and drove backward and then forward again before crashing into the barricade of police trucks.”

Mr Chanchaiyuth rolled down his window and threatened officers with an M67 fragmentation grenade, the police claim.

“He then got out of the truck and pulled the pin on the grenade and attempted to throw it at our officers,” Cmdr Boontawee said. “But our officers shot him before he could throw it. Luckily the device appears to have been a dud.”

Forensic officials and doctors at Krabi Hospital collected evidence from the scene and reported that Mr Chanchaiyuth sustained three bullet wounds to the head.

“On his person, we found 3,000 baht, Ya Ice (crystal meth) and Ya Bah (amphetamines), as well as a 9mm pistol,” Cmdr Boontawee said. “Inside his truck, investigators found 11 bags of Ya Bah, containing approximately 200 pills each, as well as a bag of Ya Ice.”

Investigators reportedly recovered at least 30 bullet casings from the scene.

Two women who were in the truck with the suspect were taken to the Border Patrol Police office for further questioning.

Public outcry sends Vachira wing back to the drawing board