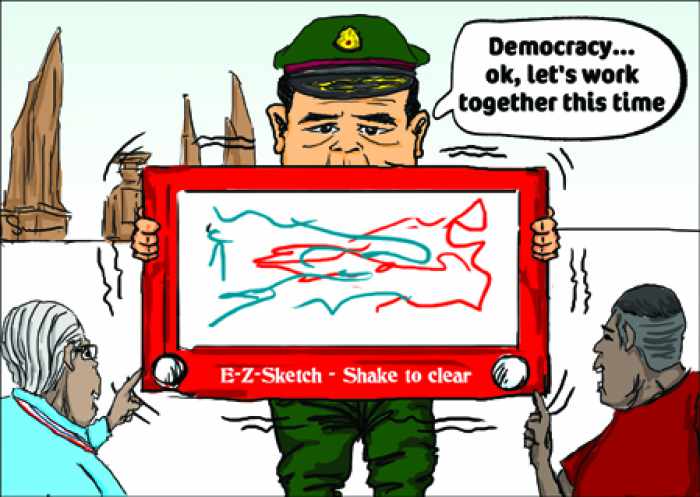 PHUKET: As the latest edition of the Phuket Gazette hits newsstands this weekend, the nationwide curfew imposed by the National Council for Peace and Order (NCPO) has already done considerable harm to Thailand’s all-important tourism sector.

Indeed, no province stands to suffer more than Phuket if international confidence in Thailand as a safe tourism destination deteriorates any further. Hence, the Gazette fully supports calls by tourism industry leaders (story here, here and here) for flexibility on curfews and other restrictions in important tourist destinations such as Phuket, where the likelihood of violent protests appears to be very limited.

While the NCPO is reportedly already drafting a roadmap to bolster an economy stilted by years of political instability, here in Phuket we can only hope that the coup leaders place tourism as one of their top priorities. This will of course go hand-in-hand with restoring the country to some form of a functional democracy.

Though a coup may appear a setback, especially to those unfamiliar with modern Thai history, past events have shown that positive strides can be made under well-intentioned appointed governments such as the one headed by Anand Punyarachun in the 1990s.

The current coup leaders have already taken one popular step in terms of agricultural policy by authorizing payouts to rice farmers contracted under the controversial rice-pledging scheme.

That said, the coup leaders should remember the lessons of Black May in 1992. There could be no better warning about the dangers of trying to parlay a “successful coup” into real administrative, political power. If it did not work then, it certainly will not work now in this new era of unprecedented political divisiveness powered, in large part, by social media. This is one information component previous coup leaders could never have imagined having to deal with. The NCPO is aware of its power, but has a long way to go in mastering its use (see here).

It is sad and somewhat embarrassing that Thailand’s tortuous journey toward democracy seems to be written on an Etch A Sketch, with opposing forces each controlling one of the two knobs until the entire screen is filled, a complete mess has been created, and the only solution is a shake-up that just brings us back to where we started.

Nevertheless, given the importance of the local tourism industry, lack of danger in Phuket and power of social media, we should all get out the message that Phuket is still a safe destination. The potential for violence and danger remains, but for the most part it exists mainly, like just about everything else in this highly centralized nation, in Bangkok.