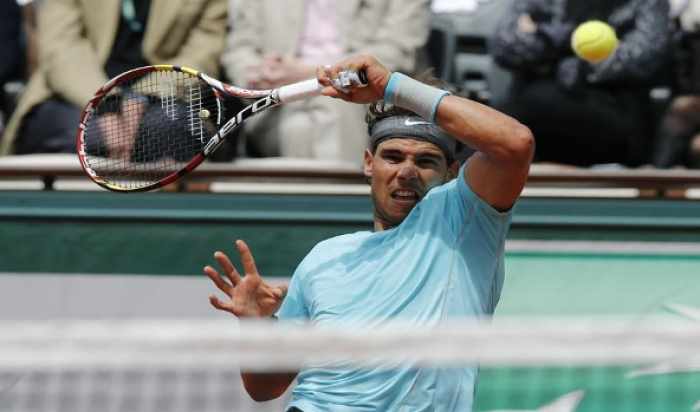 PHUKET: Rafa Nadal provided a claycourt lesson for one of the game’s young apprentices at the French Open when he crushed rising Austrian Dominic Thiem with a masterly display to reach the third round on Thursday.

The eight-times champion showed flashes of his intimidating best in a 6-2 6-2 6-3 win that was tougher than the scoreline suggested, but was never seriously in doubt against a player of whom grand things are expected.

While world No. 1 Nadal improved his Roland Garros record to 61-1 in ruthless fashion, prospective semi-final opponent Andy Murray cruised into the third round by outclassing Australia’s Marinko Matosevic.

After the seismic shock of defending champion Serena Williams’s second round exit on Wednesday, the women’s draw was relatively incident free on Day Five, with Simona Halep and Jelena Jankovic among the leading seeds to progress.

Perhaps wary of the 20-year-old Thiem’s reputation as a rising force in the men’s game, Nadal was quick to stamp his authority on Philippe Chatrier Court – the rectangle of Parisian clay that remains his fortress.

“I think it was a dangerous match, a dangerous opponent today,” Nadal, who appears to be slipping into the groove, said.

I think today I played a solid match, I knew that if I didn’t, I would be in trouble.”

He briefly was in the third set when Thiem, who stunned world number three Stanislas Wawrinka in the second round of the Madrid Masters this month, broke and held serve to lead 3-1.

His booming inside-out forehands briefly put Nadal on the back foot, but Nadal quickly responded to the challenge and won the remaining games, ending the contest on his second match point when the Austrian sent a forehand long.

Nadal, who next faces Argentine Leonardo Mayer, is on a quarter-final collision course with last year’s runner-up and compatriot Ferrer.

“I am ready for the next round and was very happy with my performance, especially with my consistency,” Ferrer, next plays Italian Andreas Seppi, said after dismantling Bolelli.

“My season on clay has been good (when asked about beating Nadal on clay this season). I have a good feel.”

Seventh seed Murray, the Wimbledon champion, produced a masterclass to win an entertaining, although one-sided, match 6-3 6-1 6-3 against Matosevic who was playing in the second round of a grand slam for the first time having previously lost 12 first round matches.

Briton Murray, who will have a sterner test against Germany’s 28th seed Philipp Kohlschreiber in round three, was inevitably quizzed yet again on who would be his next coach following his split with Ivan Lendl.

“There have been a lot of different names that people mention,” Murray, who seems to be doing perfectly well on his own, said. “Obviously Amelie (Mauresmo) this week, there was (Mats) Wilander, there has been (Jonas) Bjorkman, John McEnroe, (Martina) Navratilova, Leon Smith, who is the Davis Cup captain, Bob Brett.

“When the time is right, I will make an announcement.”

In the absence of the Williams sisters, both beaten on Wednesday, 15th seed Sloane Stephens raised American spirits by easing past Slovenian Polona Hercog 6-1 6-3.

Stephens followed her teenage compatriot Taylor Townsend, who on Wednesday became the youngest player to go past the second round at Roland Garros since 2009.

The 21-year-old Stephens blazed through the opening set before running into a spot of bother midway through the second as Hercog upped her game, but the American ended the contest on her second match point with a crosscourt forehand.

Sixth seed Jankovic was forced to battle hard in the first set by Japan’s Kurumi Nara before the Serbian former world No.1 raced away for a 7-5 6-0.

“It was not easy, she is returning a lot of balls and the court is heavy and the conditions are heavy,” Jankovic said.

Ana Ivanovic of Serbia, the 2008 champion, sailed through with a 7-5 6-2 win over Ukraine’s Elina Svitolina and Russian Svetlana Kuznetsova labored to a 7-6(5) 6-3 win over Italian Camila Giorgi, setting up a meeting with former Wimbledon champion and Czech fifth seed Petra Kvitova.

In the men’s draw home favorites Richard Gasquet and Gael Monfils both won, but Gasquet was hardly brimming with confidence after dispatching Argentine Carlos Berlocq.

“No one can bet on me for the final victory, anyway. I mean, you’d have to be out of your mind to do it,” he said.