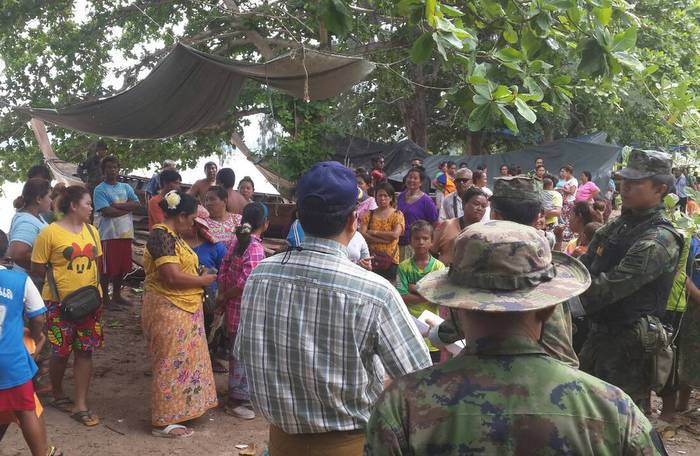 PHUKET: Police intervened in order to neutralize tensions at the Rawai sea gypsy village after a group of 40 men demanded that the gypsies demolish their spiritual ceremony hall.

Rawai Municipality received a report from sea gypsies at about 11am that a group of men, allegedly sent by private investors, had ordered the gypsies to demolish their ‘Sala Balai’, before the men erected tents to block the pathway to the village. The private investors claim to own the land that gypsies reside on.

Chalong Police and Rawai Municipality officers responded to the call, and invited representatives of both parties to negotiate in order to prevent a more serious confrontation.

“We prefer to aid negotiations between the gypsies and the private investors to prevent violence,” Lt Col Sathid Noorit of the Chalong Police told the Phuket Gazette yesterday.

On Monday, the sea gypsies showed up in force at Phuket Provincial Hall begging for help after a group of men allegedly threatened to shoot them if they tried to stop a blockade of the public pathway.

However, after speaking with officials yesterday, the men agreed to move the tents aside so that the sea gypsies could resume using the path.

“Although the tents were moved from the path, the men stayed there to guard the land, as per an order from the landowners,” said Col Sathid.

It wasn’t until Navy personnel, led by Lt Somphop Kamthana of the Royal Thai Navy Third Area Command, arrived that the men were forced to remove the tents altogether.

“We are going to call together relevant authorities and form a special committee to address this issue as soon as possible,” said Lt Somphop.

“Everything must be done very carefully to ensure that it is fair,” V/Gov Somkiet said. “However, I will organize a meeting to discuss the land ownership problem as soon as possible.”

The Department of Special Investigations (DSI) stepped in to play a role in the investigation in 2014.

The following year, DSI DNA test results supporting the villagers claims were revealed, and the DSI vowed to provide evidence to support the villagers’ fight to continue living at the village.

Establishing long duration of residency is a key element in the gypsies’ fight against private investors who had won court orders to evict some of the villagers from the site (Video Report here).