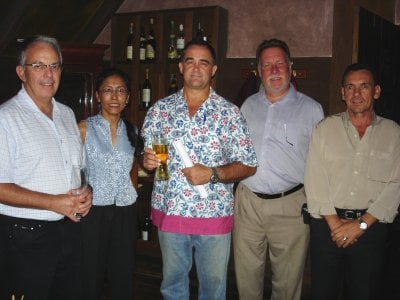 PHUKET: Members of the island’s property and construction industries, along with related occupations, met last night at the Green Man pub in Chalong to launch a Phuket chapter of the Lighthouse Club, an international networking organization that also does charitable work for construction workers and their families.

Officiating at the launch was a founder and former president of the Lighthouse Club of Bangkok, Jon Pritchard, who is a Director of international contractor Bellwater.

He explained that the club’s priorities are, in order: beer, networking and helping the families of construction workers. The Bangkok club, he noted, had built large schools for laborers’ children at both the Suvannabhumi Airport site and the giant Rom Klao National Housing Association site in Bangkok.

Keith Sinfield, Business Development Manager of high-end lighting company Futronix, told the Gazette that Phuket is expected to become the center of the club’s activities in Thailand.

“It’s a bit of a suck-it-and-see,” he said, “but a lot of members who were based in Bangkok have been transferred to Phuket. The work in Bangkok has plateaued, but all through southern Thailand it’s coming up.”

He added that the club expects to build and fund schools in Phuket, in the same way that it has done in Bangkok. “This allows workers to bring their families with them,” he explained.

The next meeting is expected to be held in Cherng Talay, on a date and at a venue yet to be decided. To learn more about the club, contact Mr Sinfield at Tel: 09-7244801 or Email: keiths@futronix.com

The Lighthouse Club was started in Britain in 1956, its aim being “the furtherance of good fellowship among people in the construction industry”. There are also branches in Hong Kong, Manila, Kuala Lumpur and Singapore.