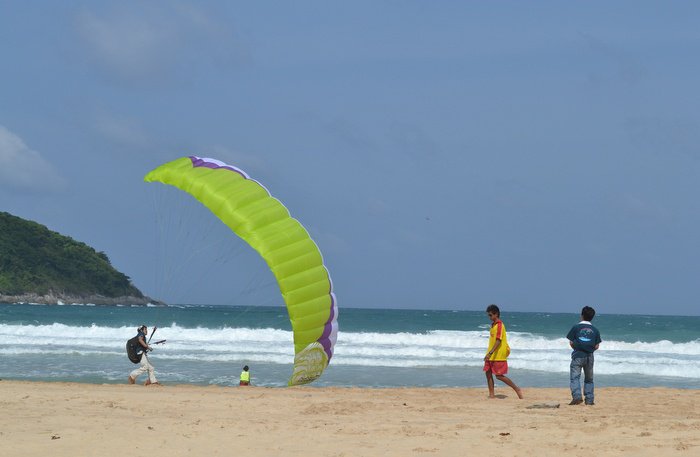 “[A recent] complaint stated that visitors were being told to get out of paragliders’ way while they were taking off,” said Rawai Mayor Aroon Solos.

The municipality is now moving to solve the problem by calling members of the paragliding club for a meeting next week.

Laem Promthep is one of Phuket’s top tourist attractions, especially at dusk when people gather to view sunsets over the western horizon.

Mr Aroon explained that there is only one takeoff strip in the area and that paragliders would either land on the beach or the nearby football field. He also confirmed that the business of paragliding is prohibited in his jurisdiction.

“Paragliding is an activity, just as surfing or diving. I can see why it attracts tourists because some visitors enjoy seeing them and taking photos of the paragliders,” Mr Aroon said.

“We are open to paragliders as long as they make sure safety comes first. They must have a proper license and make sure that they escort people without experience.”

Mr Aroon also noted that the general public have just as much right to be where they like on public land.

“Next week, we expect to come up with a solution that will prevent future arguments. One possibility is to install signs that explain the rules of using public land; that way there will be a common understanding.”