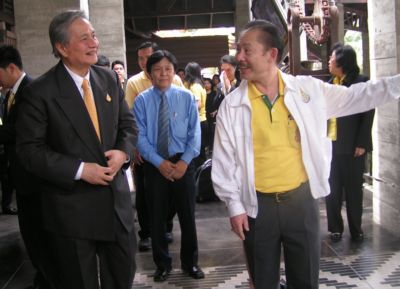 NAI YANG: Phuket’s decades-old of dream of having an International Convention and Exhibition Center (ICEC) took a step forward on May 28, when Tourism and Sports Minister Suwit Yodmanee ordered the formation of a provincial committee and gave it 60 days to decide where the center should be sited.

Mr Maris proposed that ING Funds build a 10,000-seat conference and exhibition center on some 2,000 rai in Mai Khao under the control of the Treasury Department’s State Property Management and Services Office, or Ratchapassadu.

Mr Maris’ plan for ING to completely fund the center’s construction on a 30-year “build-operate-transfer” agreement with the government was well-received by Gov Niran.

During a meeting with Prime Minister Surayud Chulanont in Krabi, Gov Niran was told to find private sector funding for the convention center, as the interim government had no intention of granting funding approval.

Under the ING proposal, the firm would rent the land under a 30-year lease, during which it would build and manage the center using subcontracted firms, both Thai and foreign, Mr Maris told Gov Niran.

“Construction could be completed within one year…All we need from the government is a land lease agreement,” he said.

Also attending the meeting was Montree Buritan, Managing Director of building firm EkCa Thai Co Ltd, which will design and build the center if the ING proposal is approved.

EkCA Thai already has plans drawn up for a meetings, incentives, conventions and exhibitions (MICE) center with seating for 10,000. The model, based on an existing convention center in Chiang Mai, could be easily modified for the Mai Khao site. Construction could begin within two months after approval, he said.

Gov Niran said, “This idea is brilliant. I have long been interested in finding private sector investment for a convention center, but usually we end up needing about 1 billion baht in government investment, and we have had trouble reaching any solid conclusions about where it should be located.

“This is the easiest way, especially as using Ratchapassadu land means we will not be required to comply with the laws that apply to private sector developments on state land or seek Cabinet approval,” he added.

Phuket’s tourism industry has suffered for too long from its inability to host large MICE events, he said.

The complex could attract further investment to Mai Khao, where an investment boom in medical services, spas and yachting could lead to the develop of a “new city” in line with provincial development plans, he said.

However, meetings would first need to be held to discuss related issues, such as laws on foreign investment and environmental impact, he added.

On May 28, after Gov Niran had left on a trip to Finland, Dr Suwit chaired a meeting at the Indigo Pearl Hotel in Nai Yang. Attending the gathering were TAT Governor Pornsiri Manoharn, Phuket Vice-Governor Worapoj Ratthasima, and representatives from state agencies and private sector groups, including the Thailand Convention and Exhibition Bureau (TCEB), the Board of Investment of Thailand (BOI), Phuket Tourist Association, Phuket Chamber of Commerce, Phuket Treasury Office and representatives of ING Funds.

After lengthy discussions, it was agreed that the project should go ahead only with private sector funding, with the government agreeing not to undermine such investment by funding a rival convention center in the province in the future.

Following objections that the Mai Khao site is too far from the island’s main population centers, the intractable problem of where to site the center once again reared its head.

Wichit Na-Ranong, who sits on the Thailand Tourism Council advisory board and is also the Managing Director to the Pearl Group of hotels, said that the presence of hotel accommodation, public services and transport links all needed to be considered in the siting decision.

The two sites now under consideration in Mai Khao, including the one being eyed by ING Funds, may be lacking in this regard, he said.

Phuket Real Estate Club President and former Phuket City Mayor Phummisak Hongsyok was among those who said that local investors should be allowed to submit proposals for the project, rather than automatically cede it to foreign investment.

After the meeting, Dr Suwit asked the Governor’s Office to appoint a committee, to be chaired by the governor himself, to be responsible for reaching a final agreement on the siting issue. The panel should consult with the TCEB and submit its final decision to him within 60 days, he said.

In the interim, private sector parties are allowed to submit bids using either of the two sites on Ratchapassadu land in Mai Khao or land held by the private parties themselves.

BOI officials would review the ING Funds proposal during that period, he said.

“This committee will choose the best location, considering such factors as proximity to the city center and the airport… It shouldn’t be too hard for them to make a decision with the input of so many people attending today, most of whom are local businessmen familiar with the issues involved and the local geography. We also need their input on how the center should be managed and what role the government should play,” Dr Suwit said.

TAT studies have determined that the minimum land area needed for the project is 125 rai, he added.

Noting that the current TAT proposal for the project has been pending for about four years, Dr