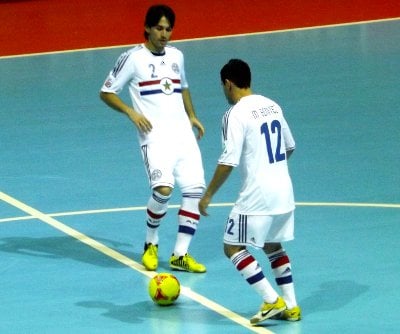 PHUKET: It’s do or die for the Thailand national futsal squad, who are set to play Paraguay in their final group stage match of the FIFA Futsal World Cup 2012.

To be played at Bangkok’s Huamark Indoor Stadium this evening, the match-up is certain to be tense and full of high energy as both sides fight for passage onto the next round of the world championship final.

Hermans, a Dutch national, echoed his view on the game: “The end result is finalized in the second half.. It’s important for us to maintain control and stay in the game for as long as possible… I know our Thai boys have the power to press and go.”

Asked about how this time will be different from the two sides’ first, last and only previous meeting – in the FIFA Futsal World Cup 2008 in Brazil, in which Thailand were shutout 8-0 by the South Americans – the coach responded: “I was with FIFA in Brazil and watched that game. I think this is a much better team now…As I’ve been stressing to the team since [being appointed Coach] in February [2012], the most important thing is to control the game and play [good] defense.”

“If this team can stay together for the next four years, I’m sure they will go far in the next [World Cup] tournament. And still, I think in this tournament, they can make a surprise.

“As for Paraguay, they are a strong team and play physical, so we will have to match their game and also play physical, using our bigger guys,” he said.

Ahead of tonight’s do-or-die match-up, both Thailand and Paraguay look forward to some good and bad news.

Thailand will be without key player, number 7, Kritsada Wongkaeo, who is banned for a match after accumulating two yellow cards in the first two matches.

Kritsada, who scored one of Thailand’s three goals against Ukraine was named ‘man of the match’ of that game, despite being on the losing side.

At the time of comment to the Gazette, Coach Hermans could not confirm whether Thailand’s star player, number 9 Suphawut “Arm” Thueanklang would play in Thailand’s match against Paraguay.

Arm, who has scored two goals in two games of this years tournament, suffered a minor leg injury in the match against Ukraine.

“We’ll have to see if he’s ready, but in the event that Arm is not available, we have other options in our arsenal…”

However, a recent report on M-Thai confirmed that the 23-year-old star has recovered and will be available for the match thanks to Hyperbaric Oxygen Therapy treatment sessions.

The report also said that star keeper Prakit Dankhunthod, who was injured late in Thailand’s match against Costa Rica, and subsequently missed their Ukraine match, has also healed and is ready to play against Paraguay.

In any case, fans should not worry too much; Coach Hermans had previously had remarked: “We don’t have a number one and number two keeper – they’re both our number ones,” referring to Prakit and reserve keeper, Surapong Tompa.

Good news for Paraguay, and bad for Thailand, is that Enmanuel Ayala will be in the starting lineup tonight.

Ayala, who scored a hat trick for La Albirroja – the white and red – in the 3-3 draw against Ukraine before being ejected for two yellow cards in that match.

He was subsequently banned for Paraguay’s following match against Costa Rica, in which the latter prevailed 3-6.

If Thailand can prevail tonight, they stand a good chance of advancing to the second round of the tournament, which would be the first time in history, following their three previous, unsuccessful World Cup campaigns that ended at the group stage.

A draw for Thailand may be enough, depending on the result of the other group A match between Ukraine and Costa Rica, which will be played at Korat Chatchai Hall in Nakhon Ratchasima province.

Both matches kickoff at 7pm.

Thailand vs Paraguay will be broadcast on terrestrial TV channel 9.

Costa Rica vs Ukraine will be broadcast on cable TV T-Sport.

Also, Group C will play their final two matches at 5pm with a Portugal-Brazil showdown (channel 9) and a Japan-Libya final (T-Sport), respectively.