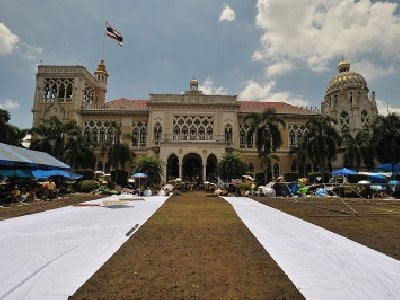 PHUKET: Phuket members of the People’s Alliance for Democracy will travel to the capital tomorrow to join a rally at Government House, where they will pressure the government to resolve the ongoing dispute over the Preah Vihear temple.

Preah Vihear temple, built on the hilly border between Thailand and Cambodia, was awarded to Cambodia by the International Court of Justice in 1962. It was named a World Heritage site in 2008, but an unresolved dispute over 4.6 square kilometers of land in the area has raised nationalist passions on both sides.

The United Nations Educational, Scientific and Cultural Organization (UNESCO) World Heritage Commission (WHC) last week postponed discussing Cambodia’s development-management plan for the ancient temple until next year, after it became clear the two countries could not settle the land dispute.

For more background on the complex dispute and the pressure the PAD protest will put on the government of PM Abhisit Vejjajiva, click here.

PAD Phuket coordinator Aparat Chartchutikumjorn said the Phuket contingent will leave tomorrow in order to be at Government House in time for the presentation of a protest letter to the Abhisit government on Saturday.

PAD members are certainly no strangers to the protest site. After months of continuous anti-government street protests in Bangkok that began in May 2008, PAD protesters in August that year laid siege to Government House, staying there more than three months with no serious police or military effort to evict them.

When they finally did leave, it was to force the closure of Suvarnabhumi Airport.

This time they plan a much shorter stay in the area, however.

“I am not sure when we will come back, but we won’t stay for too long. We just want to present a letter that asks for clear information about the agreement that Natural Resource and Environment Minister Suwit Khunkitti signed with UNESCO, as we are afraid that he might have signed an agreement with Cambodia [that infringes on Thai sovereignty],” she said.

“We will also ask the government what they plan to do at the [UNESCO] meeting [in Bahrain] next year,” she said.

Phuket PAD members on Tuesday returned to the island from Bangkok after meeting with members of another group. The Phuket PAD chapter falls under a regional grouping with affiliates in 16 other provinces, she explained.

After the Government House rally, some of the Phuket PAD members plan to travel to Srisaket to assist Thais living in the disputed zone.

“The people in that zone have a lot of problems and are unable to earn a living there,” she said.

Most of the PAD members who would join in this effort would be from nearby provinces, but five or six Phuket PAD members as well as some other Phuket supporters will probably join them, she said.

Tens of thousands of people from all parts of the country would join the protest on Saturday, but it is not expected to last long, she said.