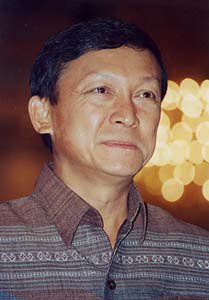 PHUKET TOWN: Thailand’s voters had to be persuaded about the benefits of the political process locally and nationally, Deputy Prime Minister Purachai Piemsomboon said today. He was speaking to about 500 guests at a conference at The Metropole hotel in Phuket Town, with the topic Local Elections and Phuket’s Future. All people, especially the young, needed to be educated about the election process, he said. Most of those at today’s meeting were representatives from local governmental units, including Tambon Administration Organizations, and the Phuket Provincial Administration Organization (OrBorJor). OrBorJor President Dr Prasit Koeysiripong, who recently announced his intention to run in parliamentary elections as a Thai Rak Thai representative, hosted the gathering. K. Purachai said that when people don’t understand the political system, “they get it wrong and hate politics and politicians. That’s wrong.” “It is our responsibility to learn, understand, and build a better Thai society from better politics,” he said. “If all Thais work on it seriously, I believe that our politics will be purified, too,” he added.