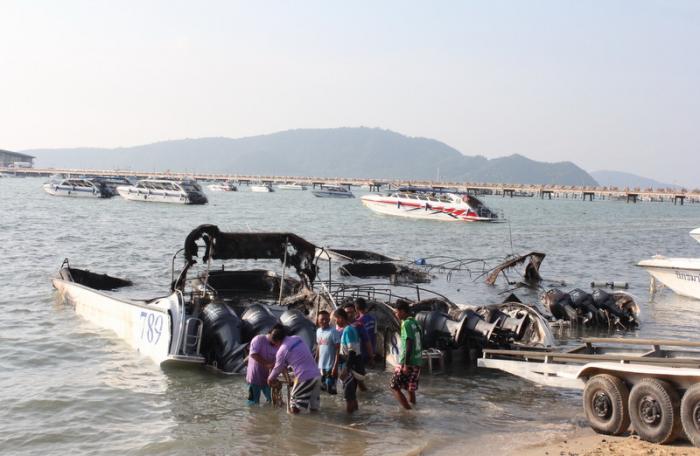 PHUKET: Police suspect arson may be the motive behind a fire that engulfed five speedboats at Chalong Pier yesterday (story here).

Forensic officers believe the fire started on the middle of the row of boats, quickly spreading to those around it. The boats were removed from the scene for further examination.

“There are two possible scenarios. Either someone set the boats on fire or the flames were caused by a short circuit in the electrical system. As the boat was pulled up onto the sands with the engine turned off, the possibility of it being a short circuit is quite low,” said Chalong Police Superintendent Noppadon Thiraprawat.

“The only eyewitness we know of, Donsafat Pormin, is still at Vachira Phuket Hospital, as he was severely burned in the incident. We have yet to question him. However, we are checking CCTV footage in the area for more clues.”

Mr Donsafat, who is part of the speedboat crew, was on board at the time of the fire.

Pisit Papakityospat, the owner of Nikorn Marine, estimated the cost of the damage to five of the company’s 40-foot, 50-passenger speedboats to be about 25-30 million baht.

“We have never had any problems with anyone. We are doing our best not to let this incident affect our tour program. Our partner has agreed to help us share the work load so we can continue conducting business as usual,” said Mr Pisit.