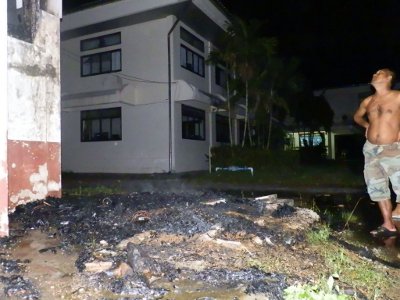 PHUKET: Phuket Police are seeking a man seen running from the site of a pre-dawn arson attack at the Thalang District Office compound earlier today.

Thalang Police, notified of the fire at 4am, raced to the scene with Thalang Municipality firefighters.

It took firefighters just 15 minutes to extinguish the blaze, but not before it reduced to ashes a bamboo sala located beside the old Thalang Community Hall.

The high-roofed building is currently used as a storage facility. The windows and part of the roof of the concrete structure received minor damage.

No human injuries were reported, but rescue workers discovered the charred remains of a large bullfrog among the cinders.

That the amphibian was unable to leap to safety in time, coupled with the fact that the sala has no electrical circuitry installed, led officials to believe the fire was deliberately set.

It was the second late-night fire in the immediate area this year. In January, another suspicious fire gutted a room on the second floor of a wooden home used as the residence of a government officer.

In that fire, two children sleeping in the room managed to flee to safety.

Boonsoong Boonchuay, a security guard at the compound, told the Phuket Gazette that he noticed the flames just after he reported in for his 4am shift.

He saw a man in a balaclava running from the area.

The incident has been reported to Thalang District Security Division chief Siripong Leeprasit, he said.

Thalang Police are now investigating the identity of the hooded man.

Staff at the District Office said they suspect the fire may have been the work of a deranged man who has been seen wandering through the compound from time to time.