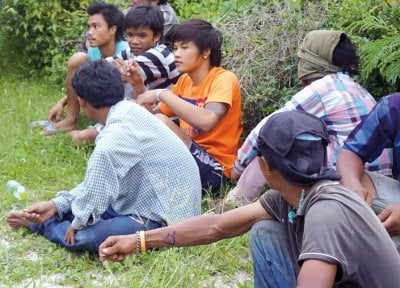 PHUKET: The Koh Kaew Tambon Administration Organization (OrBorTor) has launched a project that may be a precursor to a shift in strategy in the War on Drugs in Phuket.

The organization is inviting drug users who wish to turn their lives around to join a rehabilitation camp under the “One Local Administration Organization, One Drug Rehabilitation Camp” project.

As part of the scheme Phuket City Police, government officials and community leaders on April 26 set up a checkpoint near the entrance of Koh Kaew Soi 33, near to the Isuzu showroom on Thepkrasattri Road.

“We are working together with subdistrict headmen, village headmen, police and provincial public health officers to search for drug users. Those who admit to taking drugs will not have charges brought against them, but will have to attend a drug rehabilitation camp at Baan Sapam School,” said Suwat Bubpapo, Muang District Chief Administrative Officer (Palad).

It is not just the checkpoint on Thepkrasattri Road that drug users will have to be wary of. Police officers will set up checkpoints in different areas of Koh Kaew, where they will randomly select people to undergo urine tests.

Capt Rattaket Munmuang, Crime Suppression Inspector of Phuket City Police, said, “When we stop someone we will explain the project to them and ask for their cooperation in checking their urine for traces of illicit drugs. It is sometimes easy to find many drug users in the same area just from stopping one person, as they will often point out that there are more in the vicinity. In this way we can sometimes net more than 10 users in one area,” he said.

Those who test positive for drugs will be offered the chance to join the project and attend the camp.

“If a urine sample turns purple, police will question that person. If they admit to taking drugs, we will give them the opportunity to avoid criminal charges by voluntarily attending the camp,” said Capt Rattaket.

“However, if they deny drug use, we will send the urine sample for further tests to determine which drug the sample contains. If the test results indicate that they have taken an illegal drug, the police will issue an arrest warrant and press charges against them,” he added.

Palad Suwat explained that Koh Kaew was the first subdistrict in Phuket to run this kind of project.

“We went around to all villages of Koh Kaew and so far we have identified more than 40 drug users. Most of them are either in the working-age group or students,” said Palad Suwat.

“We inform drug users attending the camp on what to bring and how to prepare for the camp. They are told that they will have to be at the camp for the entire nine days,” he said.

“My main goal is to reduce the number of drug users in Koh Kaew. I also hope they gain a better understanding of drugs and how damaging they can be. After the camp, we will check on them from time to time to make sure they are not going back to using drugs again,” said Palad Suwat.

“After returning home, they will be subjected to four randomly timed drug tests. We will also offer any additional help they need to completely quit using drugs,” he added.

“We aim to find at least 80 drug users to send to the camp. So far we have 48 confirmed participants, plus another 10 suspects we expect to round up shortly,” he concluded.