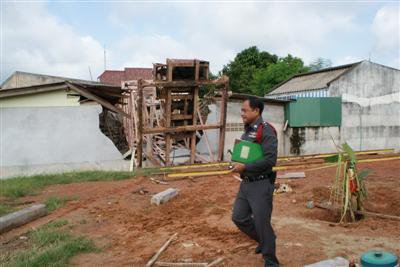 PHUKET: Residents of a small community in Khlong Hin subdistrict, Krabi, got a rude awakening yesterday morning when a 15-meter-high pile-driving tower came crashing down onto their homes.

Fortunately there were no injuries, but three homes were flattened and 10 motorbikes badly damaged.

Ao Leuk District Police duty officer Prasan Khongkaew was notified of the accident at 8:30am.

Racing to the scene in Khlong Hin Village 4, he found the tower had crashed down on three single-story rental properties along the same small street, effectively cutting them in half.

Motorcycle mechanic Prajiat Thongkham, 57, said he awoke as normal and was having breakfast in the kitchen in the back of his unit when he heard a thundering crash.

The steel structure had come straight through the roof, damaging 10 motorbikes sent to his shop for repairs, he said. Also damaged were his work table, tools and other equipment.

The table he used to store his money, which bore an image of HM The King for protection, was completely unharmed, he noted.

Even luckier was his next-door neighbor Jeeraporn Hohbai, 27, who runs a small mom-and-pop store.

As she was lying in bed getting ready to get up and open her business, she heard a strange noise and ran outside to investigate. Moments later, the huge steel lattice crashed through the roof, crushing everything in the retail area at the front of the house.

A third unit that also suffered extensive damage was also a mom-and-pop store.

An initial investigation revealed that the crane had been moved to the site a week before to bore piles for a new home. The tower had already driven the first foundation pillar and was being moved to the site where the second would go when it toppled, Lt Col Prasan said.

The contractor would be contacted for questioning and charged in accordance with the law, he said.

All who viewed the scene agreed it was extremely fortunate that there were no injuries or deaths, the Phuket Gazette notes.