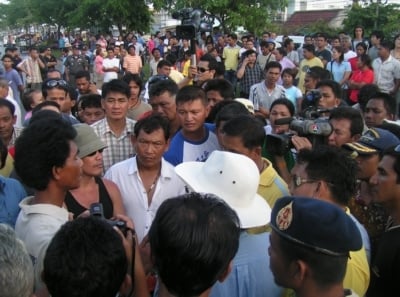 KOH KAEW: About 1,000 people from Koh Kaew blocked Thepkrasattri Rd for four hours this afternoon after a 17-year-old local youth died after being shot by a policeman on the bypass road early this morning.

The protest caused long tailbacks with some tourists forced to carry their luggage past the mob and continue their journey in another vehicle.

The protest was sparked by the death of Worawut Samarnmit, who, according to his father K. Yongyuth, was shot by Sgt Prasarn Chuayman of Phuket City Police Station.

One of the victim’s friends told the Gazette that Worawut and his friends were riding along the bypass road about 1 am when two police officers pulled alongside and asked them to stop so they could inspect their driver’s licenses.

The youths refused to stop and one of the officers fired a shot, hitting Worawut in the left hip, the friend claimed.

Worawut was rushed to Vachira Phuket Hospital, where he died soon after, the friend added.

About noon today, the victim’s family and about 100 villagers from Moo 4 Tambon Koh Kaew brought Worawut’s body to Phuket City Police Station, where they were assured by Provincial Police Deputy Commander Col Chalit Thintanee that the killer would be dealt with to the full extent of the law.

Unsatisfied by the assurances, villagers gathered in front of Yabunnoon Mosque about 2 pm and set up a blockade, refusing to let traffic pass.

At 3:15 pm, Phuket City Police Station Superintendent Col Nos Sawetalek arrived to negotiate with the protesters. He offered three assurances in return for them disbanding: 1) Police will not allow the suspect to leave the province; 2) The officer will be suspended from duty during the investigation; and 3) Five villagers will be appointed to the investigation committee.

However, the villagers refused to disperse and instead presented a list demanding:

1. an officer be named responsible for the case;

2. the officer who shot Worawut be discharged from the police force and all police officers assigned to Koh Kaew be assigned to another area;

4. the officer who shot Worawut pay compensation to the victim’s family.

5. protesters be granted immunity from prosecution for staging the protest.

6. all the demands be agreed in writing.

Col Chalit agreed to the demands, saying that he would be responsible for the case.

The crowd dispersed after the victim’s father confirmed that police had accepted their demands.