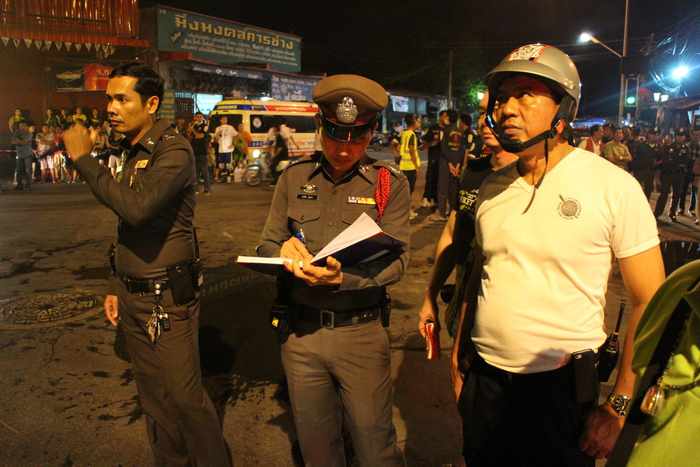 PHUKET: Officers investigating the cause of the deadly Phuket Town fire that killed a family of three and one woman early Saturday morning have ruled out the possibility of arson.

Flames engulfed the Chokchai Furniture shop in Phuket Town at about 2am on Saturday (story here).

The shopowner, Janhorm Jakkaew, was the only one of five people in the building that survived the fire, as she was able to jump from the second floor to safety (story here).

Maj Sakchai Chunyong of the Phuket City Police confirmed to the Phuket Gazette this morning that police now believe the fire started on the first floor, rather than the second, and was caused by an electrical short circuit.

“At this stage, we do not believe the fire was started on purpose. No one from outside the shop could have started the fire, as all the doors and windows were tightly locked,” said Maj Sakchai.

“We found that the most serious damage was at the center of the first floor, which makes us believe that the fire started there.

“A lot of wooden furniture was stored on the first floor, which would have caused the flames to spread quickly and climb to the second floor, where mattresses were kept.”

Forensic police are continuing their investigation, said Maj Sakchai, and will confirm the cause as soon as possible.

Ms Janhorm, the owner of the building, is recovering well, confirmed a hospital nurse.

“Today Ms Janhorm will be transferred from the Intensive Care Unit [ICU] of Vachira Phuket Hospital to a regular room in Bangkok Hospital Phuket where she can continue her recovery,” a hospital public relations staffer told the Gazette.