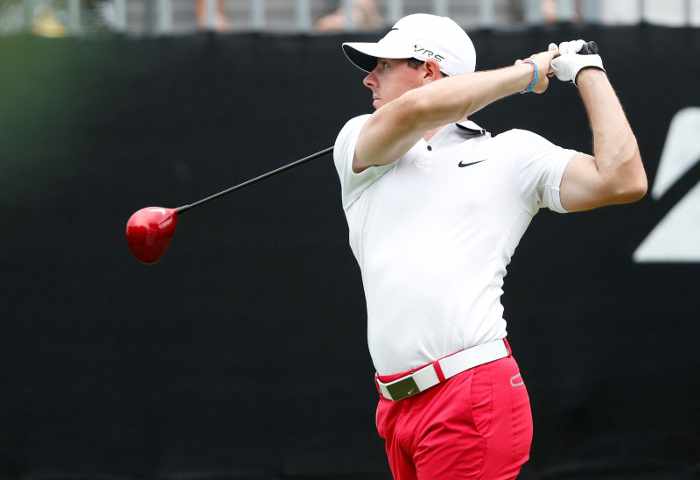 PHUKET: Rory McIlroy continued his dominating form when he won the WGC-Bridgestone Invitational by two strokes on Sunday and regained the world number one ranking, replacing Australia’s Adam Scott.

McIlroy made a sizzling start to the final round with three consecutive birdies to quickly erase a three-stroke deficit and surge past Sergio Garcia at Firestone Country Club in Akron, Ohio.

The Northern Irishman carded a 66 to finish at 15-under-par 265, while Spaniard Garcia (71) was second on 13-under, with Australian Marc Leishman (67) another shot back in third place.

Defending champion Tiger Woods pulled out of the tournament after aggravating his troublesome back, raising more questions about the playing future of the 14-times major champion.

McIlroy, 25, took the world number one ranking for the fifth separate occasion, and the first since March of last year, displacing Scott, who had been on top for 11 weeks.

McIlroy, who won the British Open in his previous start two weeks ago, collected US$1.53 million for his first victory in a World Golf Championships event.

And he did not sound like he was ready to rest on his laurels as he heads to the PGA Championship at Valhalla in Kentucky, where he will seek a fourth major title.

“Mentally I’m really sharp,” he told reporters. “It’s the most comfortable I’ve ever felt trying to close out a golf tournament out there today.

“It felt normal, like a first or second round. It didn’t feel like the fourth round. I didn’t get ahead of myself. I just kept playing shot after shot after shot.

His current form is the best of his career, he said, even better than at this time two years ago, when he won the PGA Championship by eight strokes.

Not that he played flawlessly on Sunday, but he invariably extricated himself from trouble with an assured putting stroke that limited the damage to just one bogey.

Garcia finished second to McIlroy for the second event in a row, but this time had only himself to blame as his putting touch deserted him.

“I didn’t feel comfortable on the greens at all, with the speed of the greens changing quite dramatically after the (morning) rain,” he said.

“They were quite slow and I started second-guessing myself every single putt. The good putts I hit I misread and the bad ones weren’t going in the right direction either.”

He was long gone after hitting his next shot before a search party eventually located the missing jewel in the thick rough.

Even the early departure of Woods, who pulled out on the ninth hole after aggravating his surgically-repaired back, could not steal the limelight from McIlroy.

But the Northern Irishman acknowledged he had a long way to go to be spoken of in the same breath as Woods.

“I’m not comparing myself. He’s done this millions of times,” McIlroy said.