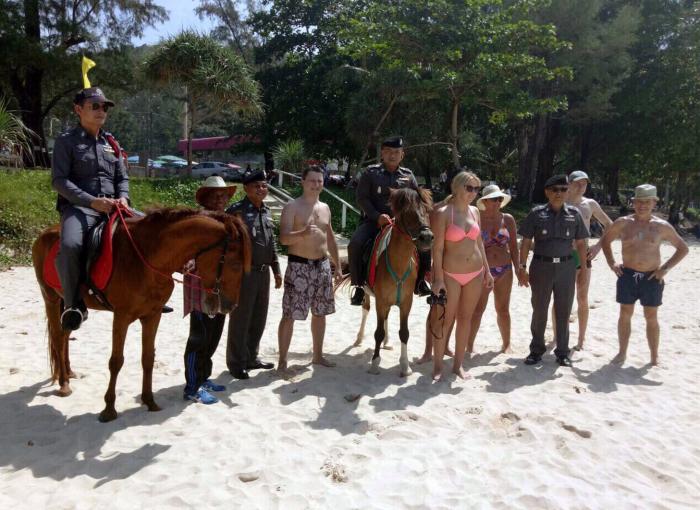 PHUKET: Police officers saddled up on ponies at Surin Beach this morning on the first day of a trial to have mounted police patrol the sands during the high season.

The horses have been employed at the beach to make it easier for police officers to get across the sand, after they found it difficult trudging along the beach on foot, Region 8 Deputy Police Commander Chalit Thinthanee told the Phuket Gazette.

“The horses are well trained so the officers don’t need to be accomplished horse riders. They’ll be patrolling two days a week, depending on the weather,” said Gen Chalit. “The horses can help officers reach people in need of help more quickly.”

Cherng Talay Police have been charged with overseeing the equestrian beach patrols, using six horses in total, supplied to police by private companies.

The addition of the horse patrols is part of an initiative to boost police presence during the high-season. We hope it will help officers respond quickly to incidents and boost confidence among visitors,” said Gen Chalit.

“This is part of high season safety boost. We can take action quicker with this. The tourists will feel more confident about visiting Phuket,” he added.

“If feedback is positive then the horse patrols will be expanded to other beaches,” confirmed the general.