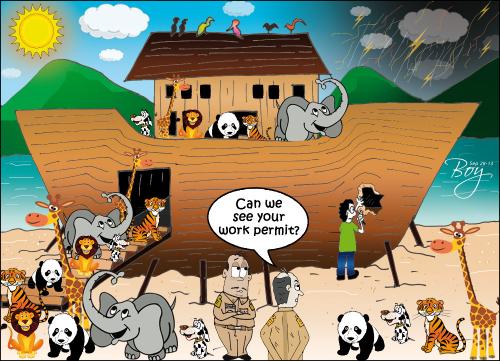 PHUKET: A recent crackdown on Westerners working illegally in the marine leisure industry has generated a great deal of comment from readers, yet the debate focused almost solely on Thailand’s notoriously vague definition of what constitutes work, while missing out on some fundamental aspects of the issue.

Comments posted on the Gazette website failed to reference the fact that arrests of foreigners for labor and immigration law violations seem to cluster in the low season.

Before we explore that issue further, it needs to be understood that Thai authorities have two quite different definitions – legally and linguistically – of what constitutes “foreign labor”.

The first involves rang ngan tang daow (alien workers), the term for low-wage migrant workers from neighboring countries, most typically Myanmar nationals. It is widely understood that they make up the vast majority of illegal workers on the island. Those among them who work here legally do so under a completely different regulatory structure than other foreigners.

At the other end fall rang ngan tang chart (international workers), who are most commonly nationals of important tourist source markets. Here we are referencing the latter and not the former, whose troubles while toiling in Thailand have already been the subject of much futile editorializing in this space. All we can say on that topic is that, fortunately, the number of those posing as officers of the law in order to extort illegal Myanmar nationals and their employers seems to have decreased.

Back to the issue: rang ngan tang chart crackdowns. Given the highly seasonal nature of tourism in Phuket, it should come as little or no surprise that crackdowns come with the southwestern monsoon winds – the low season for tourism.

During the high season, authorities involved in tracking the movements and activities of rang ngan tang chart have a more complex task at hand than raiding a sprawling labor camp and asking to see some papers. These agencies are forced to deal with an overwhelming flow of foreigners seeking extensions, notifications, proof of residency documents and so on.

During the low season, officers have far more time for other activities, such as investigations and public relations. So to dispense some practical low-season advice to those who claim to worry about being arrested and deported for taking part in a volunteer beach cleanup or opening a beer without a work permit: worry less about the letter of the law and more about how to function by making a humble, positive contribution to Thai society. It’s an exercise in fuzzy logic; anything can happen to anyone anytime, but those who follow that rule are unlikely to run into trouble with the Thai authorities, even during “crackdown season”.