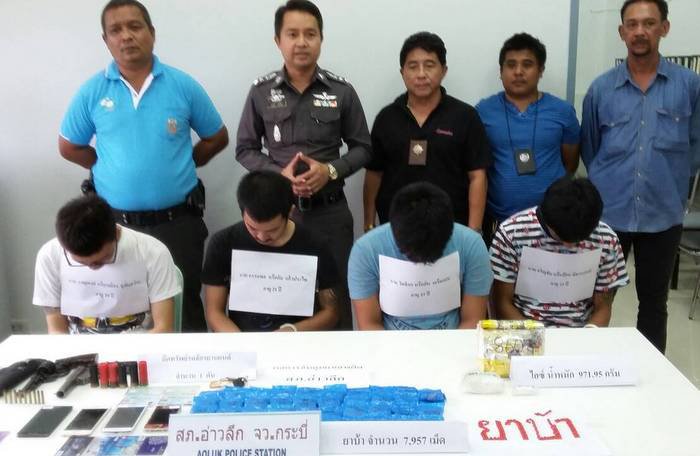 PHUKET: A police officer’s son, along with three other men, were arrested with nearly three million baht worth of drugs at a residence at the Ao Luek Police Station barracks in Krabi on August 2.

Ao Luek police were tipped off by one of their own officers, whose son was dealing from a former residence at the station.

“They go by the gang name Withee Khong and were selling drugs to teenagers and small dealers in the Ao Luek area, using the room at the police barracks as their center,” said Col Passakorn Sonthikun, superintendent of the Ao Luek Police Department.

“We appreciate our officer, Mr Attapon’s father, cooperating with us and giving us the tip,” he added.

Mr Attapon was staying with his father at the Ao Luek Police Station until recently, when his father moved to another residence.

“Many of Mr Attapon’s friends would come and go from the home. His father attempted to tell his son not to have so many friends over, but he didn’t listen. So, he decided to ask us to keep an eye on them,” Col Passakorn said.

Police kept surveillance on the men until August 2, when Mr Watthikorn came out of the residence acting suspiciously. Police then searched him and found small amounts of ya bah pills and ya ice hidden in his bag.

“We then checked the room and found two guns belonging to Mr Watthikorn, four bank books with a total of three million baht between accounts and the large stash of drugs that had been thrown out of the window,” Col Passakorn said.

The group confessed that they had only been in business for about a month and received their drugs from a dealer in Samut Prakan province.

“As this was a large amount of drugs, we will not stop with them. They have already given us information about the bigger dealers, as well as the smaller dealers in Ao Luek,” Col Passakorn said.

“We have informed the Samut Prakan police to keep an eye on their area for any drug activity,” he added.

A Decade Ago: Tsunami warning issued in Phuket