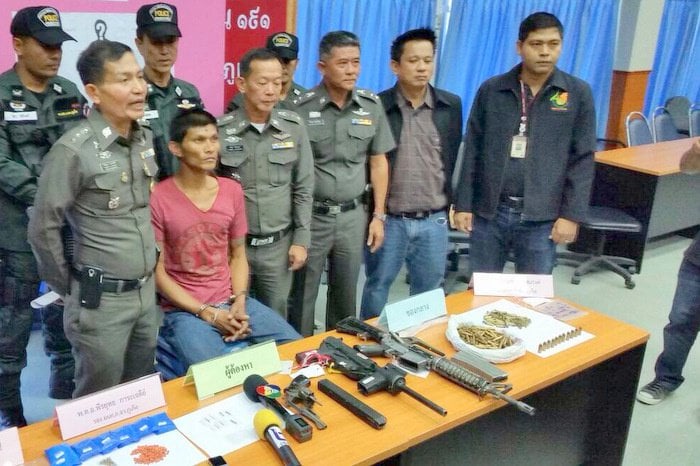 PHUKET: The arrest of a petty drug user on Wednesday led to police busting a major drug dealer who was found in possession of an M16 assault rifle yesterday.

“In the house, officers found 1,135 tablets of ya bah [methamphetamine], 7.9 grams of ya ice [crystal methamphetamine], an M16 assault rifle with 155 rounds of ammunition and a .32-caliber pistol with 55 bullets,” he said.

Mr Surasak was wanted for threatening a municipality officer with a handgun in an incident near the Downtown Market, on Ranong Road in Phuket Town, on June 21, 2013.

“Mr Surasak crashed his pick-up truck into a car belonging to Susathit Plawutthiwadee, an officer with the Phuket City Municipality,” Col Peerayuth said.

“Mr Surasak got out of his pick-up to talk to Mr Susathit, but on seeing Mr Susathit in uniform and mistakenly thinking that he was a police officer, Mr Surasak pulled out a handgun and threatened Mr Susathit, before fleeing the scene on foot.”

Police soon arrived at the scene to find 4,580 pills of ya bah, 50 grams of ya ice, an M3 submachine gun and nearly two dozen .45-caliber rounds for the M3 in the pick-up truck.

“Police began searching for Mr Surasak after discovering that the pick-up truck was registered in his name. A warrant for his arrest was issued, and he has been on the run ever since,” Col Peerayuth explained.

That was until Wednesday night, when police arrested petty drug user Sorasak Sukjan for possession of two pills of ya bah.

“Officers arrested Mr Sorasak at about 9:30pm. During questioning, he said that he could provide the known location of his supplier, who he said was a major drug dealer known as Surasak Rabeabdee,” said Col Peerayuth.

“We have learned some new information from questioning these suspects, and we are now investigating these new leads in order to arrest other drug dealers,” Col Peerayuth said.