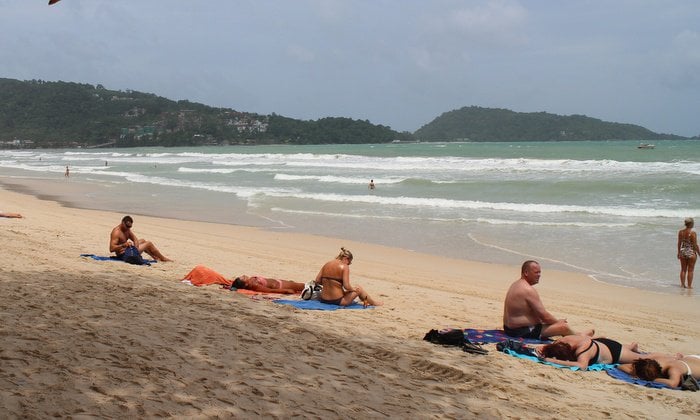 PHUKET: Packaged snacks have, for the moment, been given an official stamp of approval for consumption on the beach, while Phuket’s local administrative bodies determine what other types of food they might permit us to eat.

The clarification comes in the wake of Governor Nisit Jansomwong on Tuesday announcing that smoking and eating would be banned from Phuket’s beaches as part of the new post-cleanup beach improvement rules (story here).

“At the moment we are not allowing meat [or seafood dishes], such as som tam or deep fried chicken, on the beaches. Snacks that come in a package, such as crisps, are fine though,” Vice Governor Suthee Thongyam told the Phuket Gazette today.

Vice Governor Suthee went on to explain that officials needed more time to finalize the details of the food rules.

“There is a long way to go before the rules can be finalized and standardized. As Governor Nisit has said, these rules aim to change the bad habits that have been a problem on the beaches for 30 years,” V/Gov Suthee said.

“We are waiting for local administrative bodies to set their rules and send them to us. Then, we will review all of the information and set standard rules for every beach. We hope to have this taken care of as soon as possible.”

V/Gov Suthee noted that penalties had not yet been set for beachgoers who breach the food rules.

“However, people who smoke on the beach could face a fine of up to 2,000 baht, as this ‘law’ already exists. It is up to each local government body to determine an appropriate fine for eating forbidden foods on the beach,” V/Gov Suthee said.

The vice governor called on all island dwellers to maintain cleanliness on the beach.

“The most important thing is to not leave any waste behind on the beach. We have come so far already,” said V/Gov Suthee. “We need help from everyone, so we can all have a good time and enjoy Phuket’s beautiful beaches forever.”