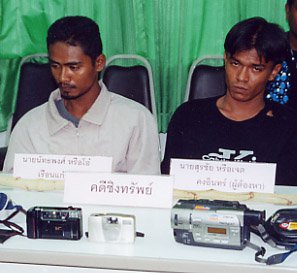 PHUKET: Two men now under arrest have confessed to assaulting and robbing German tourists Rainer and Susanne Siebert and two others have confessed to receiving the stolen goods. The Sieberts, who were knocked unconscious and robbed last week, flew out for Germany yesterday afternoon with most of the stolen items after recovering from their injuries. Surachai “Jade” Khonginn, 25, and Nattapong “Oh” Ruenkaew, 24, both from Nakhon Sri Thammarat, told police they robbed the tourists because they needed money. Surachai, an assistant cook for a now-closed restaurant, had been unemployed for three months while Nattapong, who had a history as a bag-snatcher in his home town, said he needed cash to buy items for his newborn baby. Nattapong said that the idea of robbing tourists only occured to him on a fishing expedition to Nai Harn, where the offense took place on June 24. Pichai Payakpong, 38, from Phuket and Thanom Rungsri, 40, from Pattalung, were arrested soon after the robbers were and confessed to having received the stolen goods, police said. Pol Maj Jessada Saengsuree, of Chalong Police Station, told the Gazette that a camcorder, a camera and two empty belt bags were returned to the tourists. Another camera is still missing. Pol Col Apirak Hongtong, Deputy Commander of the Phuket Provincial Police, said more police would be made available to keep an eye on Chalong, Rawai, Nai Harn, Kata, and Karon. He added that a rise in unemployment levels had led to an increase in crime. Police, who are currently investigating another similar case, advised tourists to keep expensive equipment out of sight whenever practical and said that everyone should avoid putting bags containing valuables in the baskets of motorcycles.

Govt seizes land from 39 in Phuket

Nearly one death a day on Phuket roads