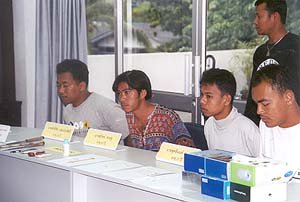 PHUKET TOWN: Officers arrested four men from a gang of seven who have been terrorizing people on motorbikes on roads in Kathu and Phuket Town for the past two months, threatening their victims with long “Sparta” blades. Pol Col Paween Pongsirin, Superintendent of Phuket Town Police Station, said today at a press conference that since July police had received no fewer than 18 complaints from people robbed by the gang. Officers nabbed Sakchai Saengprasit, 26, from Phattalung, and Suthinon Kongkaew, 21, from Trang, while they were having dinner at E-Sarn Rod Ded Restaurant on Wichit Songkhram Rd, about 12:30 am on Saturday. About 2 am on Sunday, officers raided a rented room on Soi Bangjiam, in Kathu, where they arrested Suwit Chuaydoo, 25, from Trang, and Thawatchai Promsirikul, 21, from Phuket. Evidence seized included three motorbikes as well as 10- and 7-inch-long knives in cardboard scabbards. Officers also recovered stolen goods, including Motorola T190 and Nokia 6610 mobile phones, three golden necklaces, 114 mobile phone accessories and a bottle of Giffarine moisturizing lotion. Two victims, named only as “Tuey” and “Joy”, said at the press conference that they were heading home on a motorbike on August 8 when Suthinon and Suwit followed them on another motorbike. While Tuey rode uphill to Moo Baan Iravadee Getho, Suwit reached over from his bike, grabbed Tuey’s arm and ordered him to stop. Suthinon pulled out a “Sparta” blade and held it against Tuey’s neck, then removed the key from Tuey’s motorbike and ordered Tuey to hand over his bag. The robbers made off with Tuey’s Nokia 8250 mobile phone and 1,000 baht. During the press conference, Suwit said that the gang spent the spoils of their robberies on drinking and partying. Whenever they ran out of money, they robbed again. Col Paween said, “This gang has ruined Phuket’s reputation. If they robbed foreigners, [Phuket’s reputation] would deteriorate further for sure. They shared cash equally, but Thawatchai would take any stolen belongings and sell them at Tung Tong market.” The men were charged with committing robbery while using vehicles, receiving stolen goods and falsifying ID documents. Col Paween produced Thawatchai’s ID card, showing that the picture had been replaced, and explained that Thawatchai did this so he could sell the stolen mobile phones to shops. “I urge mobile phone shopowners to be aware and check ID cards thoroughly anytime someone comes to sell them a mobile phone,” he said. Col Paween added that officers are now searching for three other gang members, who he named only as Daeng, Dream and Che.

Ombudsman “works for all’