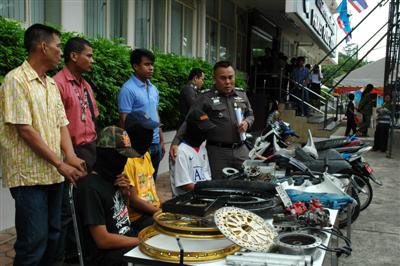 The arrests were made after police spotted a blue Yamaha Mio, which had been reported stolen from the campus of Phuket Technical College, parked outside one of the suspect’s homes.

Officers laid in wait until the thief came and put a key into the ignition before moving in to make the arrest and seize the motorbike.

Two accomplices were also arrested, and two more bikes and many bike parts were recovered.

The thieves’ modus operandi was to seek out motorcycles with keys left in the ignition by their owners. Rather than steal them immediately, they would first steal the key and then wait until they were sure the owner was not within sight of the vehicle.

When they had their chance, they would drive the motorcycles to their home on Thep Anusorn Rd in Wichit, where they would completely disassemble the bikes and sell the parts.

The main chassis would then be thrown into a swamp off Soi Palai in Chalong Village 3.

The trio admitted they had stolen one of the motorbikes from Phuket Vocational School in similar fashion.

As minors, the thieves’ identities were not revealed and charges will be filed against them with the Juvenile Court.