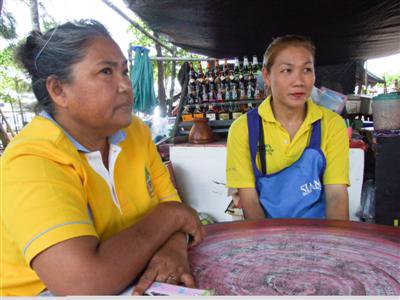 NAI YANG BEACH: The owners of 13 beach-side restaurants located inside Sirinath Marine National Park are refusing to relocate to new premises that were built for them at the park’s visitors center, saying that the new shops are too small and distant from the sea.

The latest dispute in the area is only the latest chapter in a decades-old dispute over the right to use the Nai Yang beach front, the southern half of which is administered by the Sakoo Tambon Administration Organization. The other half is located inside Sirinath National Park, which covers 22 square kilometers south of the airport.

Sirinath National Park built a “food center” style facility with 10 shops to accommodate some of the 13 vendors who currently operate on land inside the park, but the vendors are refusing to relocate.

Restaurant owner Somjit Lakbarn said that the new premises offered by the park, each just three meters wide and four meters deep, are too small.

Her current operation, started more than a decade ago, has seating for ten customers and offers a wide assortment of dishes, including somtum, roast chicken and a variety of grilled seafood, along with beer, whiskey and other beverages. Under the rules of the new food center, each vendor would be restricted to a single type of food. Location is also a problem, she said.

“I am not confident I can attract customers and make a profit at the new place because it is more than 100 meters from the beach. Also, all the vendors will have to pay to buy plates, bowls and cutlery, and pay the cleaning and dish-washing staff hired by the food center,” she said.

Ms Somjit said she had raised these issues with Park Chief Charuay Inchan, but that he dismissed them and said the vendors were not in a position to negotiate.

“He just said it was park policy to make the beach more beautiful,” she said.

The restaurant owners have already sent a petition to Phuket Governor Preecha Ruangchan asking that they be allowed to remain. Some of the vendors have been operating there for twenty years.

“I believe the governor will give me the justice. We earn a living in an honest way, offer a good service and don’t take advantage of people,” she said.

As part of the petition, the restaurant owners outlined steps they would take to keep the beach beautiful if they are allowed to continue operating there.

“I promise I will do my best to keep the beach beautiful. I just beg the governor not to force me to move from here,” she said.

“The former park chief allowed us to set up our business here under the promise that we would protect the trees and keep the area clean. We have been operating here happily and without incident for a long time,” she added.

Current park chief Charuay Inchan isn’t budging. He said, “The law is on the side of the National Park and I have already informed the National Parks Region 5 Office in Nakhon Sri Thammarat, which is preparing to take legal action against the encroachers.

“When the court orders the eviction of the vendors, they will have 30 days to comply. If they fail to do so, the shops will be removed by the state and they will be charged for the work in removing them. As for the ten new stalls completed in October, only one is currently being used. The other stalls are available to the existing beach vendors on a first-come, first-served basis,” Mr Charuay said.

“Nai Yang National Park needs to develop the area in a standardized way. We have been getting lots of complaints from people about the state of the beach. The new food center will also improve hygienic conditions for tourists who come here to eat,” he added.

Outside the park boundary, south of the closed-down Crown Nai Yang Suite Hotel, some 33 roadside shops and stalls line the beach road. The days also appear to be numbered for these small-scale entrepreneurs, who are also encroaching on public land.

Sakoo Tambon Administration Organization President Surapomg Panyawai, now in his second term, told the Gazette that he agrees with Governor Preecha’s plan to tidy up the entire 2-kilometer Nai Yang beach front and make it more attractive to tourists.

The administration has already submitted a proposal for 23 million baht in provincial funding to construct a single-story building to house all 33 shops.

“We have already held a meeting with the shop owners and they agreed with the plan. We will begin construction as soon as the governor gives his approval. The vendors agree to move into the new facility as soon as it is completed,” he said.

“After the building is finished, I will not allow the construction of any new shops near the beach,” he added.

In 2005, the Sakoo Tambon Administration Organization spent 15 million baht in funding that was provided by the Tourism Authority of Thailand to build 30 single-story shops for the vendors on National Park Land.

The park halted construction in August of that year, pointing out that permission had only been verbal and that the structures, by then 60% complete, did not follow the originally specified design.

Then Phuket Governor Udomsak Uswarangkura visited the site and ordered the buildings torn down, agreeing with the park authorities that they were an eyesore, blocking sea views from the road.