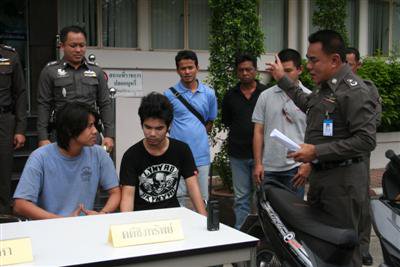 PHUKET CITY: Two young men were arrested on the morning of December 8 in Tambon Rassada for beating up an off-duty sailor, stealing his safety helmet and walkie-talkie, and then allegedly using the equipment to pose as government officers to extort money from Burmese workers.

At a press conference led by Phuket Provincial Police Commander Apirak Hongtong at the Phuket City Police Station at 11 am on Monday, the two suspects were identified as Phuket natives Chalermporn Naweekorn and Chanon Sirinararat, both 22.

The media were told that Jatophongsatorn Netimongkol, a Royal Thai Navy sailor, arrived at Phuket City Police Station at around 5 am that morning to report that he had been beaten and robbed by two men.

Mr Jatophongsatorn told police he had left work at a local beer hall and was dropped off near his home at the government housing complex for Navy personnel at Saphan Hin. As he walked the rest of the way, two men came quickly over the bridge on a motorcycle and parked in front of him.

Mr Jatophongsatorn described both men as about 22 years old, between 160-170 cms in height and with dark skin. The pair attacked him, stamping on him and punching him in the head and torso. One of the men then held a knife to his neck and grabbed his safety helmet and official radio, before the two of them ran off.

Police claim that the two men then drove to the RTH Co labor camp in Tambon Rassada Village 1 and approached Ms Orn-uma Detpakdee, the owner of the camp’s general shop.

Ms Orn-uma claims the men said they were police officers and had received orders to search Burmese laborers at the camp.

Ms Orn-uma was surprised at this and telephoned the police. When police officers arrived at the scene the two men fled into the jungle, but officers gave chase and were able to apprehend them.

On questioning, the two men confessed to attacking Mr Jatophongsatorn while drunk. They said that after fleeing the scene their motorcycle ran out of gas, so they entered the camp with the intention of asking for money to buy more fuel.

They denied impersonating police officers or attempting to extort money.