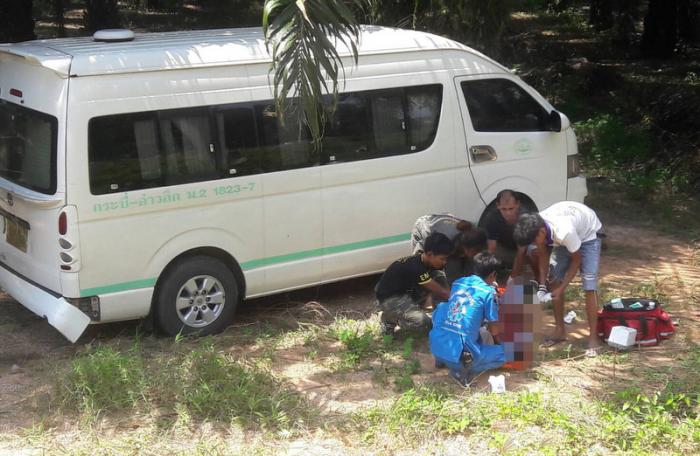 KRABI: Police are hunting for at least two gunmen who killed a van driver in Krabi yesterday.

“The victim’s van was found in a palm plantation on Petch Kasem road in Ao Luek Tai sub-district. On the driver’s seat, we found Chalee Petchpuang, 48, covered in blood, with bullet wounds to his neck and forehead,” said Capt Manas Inthornprom of the local police.

The body was then taken to Ao Luek Hospital.

“There was also a bullet hole in the driver’s side window. It seems like he was shot in the back of the neck and the bullet exited through his forehead, making him lose control of the van and crash into the palm plantation,” said Capt Manas.

The suspects took a security camera from inside the van.

“Witnesses in the area told us that before the incident, they saw Mr Chalee waiting for customers at Ao Luek station. Two men came and chartered the van to Na Nua sub-district. That was the last anybody had seen of him,” said Capt Manas.

The victim had been the target of an attempted murder once before in Trang, but had managed to escape with injuries.

“We believe that he was shot due to a relationship issue. The victim had broken up with his wife and had two girlfriends. One of his new girlfriends had an ex-boyfriend who was just released from prison. However, we will investigate further and uncover more details to find the truth,” said Capt Manas.

B200k worth of drugs nabbed in ‘random check’ in Phuket