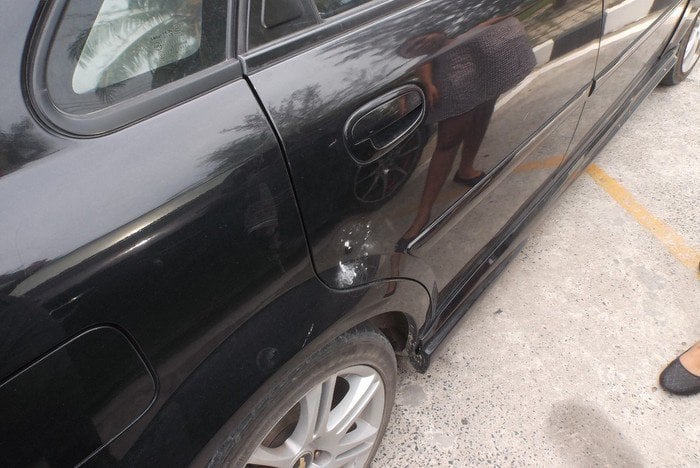 PHUKET: Kamala Police are hunting two motorbike-riding men* who chased down and threw rocks at a Swedish man’s car in Phuket on Monday.

Bo Jonas Daniel Svegsjo, 38, and his passenger, Chaiyanan Boonpa, were driving from Cherng Talay to Kamala when a motorbike carrying two men overtook his vehicle on a narrow road.

“Mr Svegsjo honked at the men, as the road was very dangerous for overtaking,” Lt Col Navin Petchan of the Kamala Police told the Phuket Gazette today.

“The men pulled their bike over to the side of the road, and the passenger picked up a handful of rocks. They then followed Mr Svegsjo, and one of them threw a rock and hit the left side-view mirror.”

“The men followed Mr Svegsjo into the street and overtook his car. They turned around and threw two more rocks – hitting the front right window and the right rear panel – before fleeing,” he explained.

The victims were able to provide police with clear photos of the culprits in action.

“We have since also obtained a photo of what we believe is the licence plate number of the suspects’ motorbike,” Col Navin said.

“We have asked the victims to come to the police station to confirm whether or not this is the correct licence plate so we can move forward and make the arrests.

“Once we arrested the two men, they will both be charged with damaging another person’s property.”

* Since this report was published, it has since been confirmed that the two ‘men’ were in fact teenagers (story here).