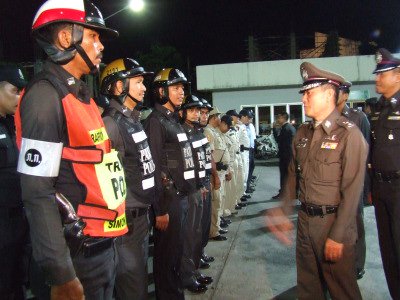 PHUKET: More than 100 Phuket police officers and volunteers conducted a sweep of Patong last night in a “Valentine’s Night” crackdown on youth crime.

The raids began after a “rallying of the troops” at Patong Police Station at 9pm.

Officers were told to sweep though Patong, paying particular attention to crime-risk areas such as Bangla Road.

“Some young people like going out at night and are always involved in drugs, so officers are checking the area to protect the public from criminals on Valentine’s night,” said Patong Police Superintendent Arayaphan Pukbuakhao.

“Young people always go out on Valentine’s Day and some youngsters are likely to break the law,” Phuket Police Commander Pekad Tantipong said.

“We must pay closer attention to Kathu [which includes Patong and Kalim], because it is a very important area with many tourists affected by crime – and all tourists want to feel safe and secure.

“If police step up law enforcement in this area, crime will definitely fall,” the commander said.

Any youngsters found out late last night were told to go home.

In the raids police arrested one man for being in possession of ya ice (crystal methamphetamine) and possession of pirated copyright goods with intent to sell.

Fifty people were subjected to on-the-spot urine drug tests. One person tested positive, but for which drug has yet to be confirmed by more comprehensive tests, said Maj Nikorn Chutong of the Kathu Police Crime Suppression unit.

There were no reports of youths being involved in violence in Kathu last night, he added.

Phuket Memorial for Tony Knight to be held Saturday