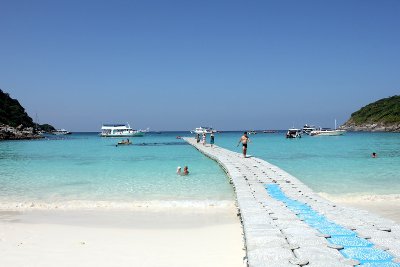 PHUKET: Chalong Police will not be conducting further investigations into two separate drowning deaths of Chinese tourists off Phuket this week, the Phuket Gazette has learned.

Chalong Police Deputy Superintendent Boonlert Onklang told the Gazette yesterday that he received a report at about 11:30am on Tuesday informing him that a Chinese woman had died while on a snorkeling trip to the popular day-trip island Koh Racha Yai, about 25 kilometers south of Phuket.

He named the woman as Huang Pei Ying, 53.

“The tour guide, Somjit Saetun, told me that she noticed the Chinese woman was not moving, so she went to check on her, but the woman was already dead,” Lt Col Boonlert told the Gazette.

“A rescue foundation worker brought her body to Vachira Phuket Hospital to verify the cause of death. The doctors there determined that she had died as a result of drowning,” said Col Boonlert.

“I spoke with other tourists on the same snorkeling trip and they said they didn’t notice anything unusual. They thought she was just snorkeling because she was floating face down,” Col Boonlert explained.

“No one said they knew anything about a pre-existing medical condition and no one reported seeing anything suspicious where they were snorkeling,” he added.

“She is believed to have drowned after suffering complications brought on by a pre-existing medical condition,” he said.

Ms Ji, identified by her passport as 41 years old, was on a snorkeling tour off Koh Hei (“Coral Island”), about five kilometers directly offshore from Rawai Beach.

“The victim’s relatives told me that the woman had a medical condition and that she suffered from low blood pressure, and doctors believe that her body went into shock while snorkeling,” said Lt Col Aekasit.

The deaths of Ms Huang and Ms Ji follow Chinese snorkeler Jin Giuping being found floating face down by her husband during a snorkeling tour near Koh Racha Yai on July 7. However, quick action by tour guides and the Royal Thai Navy resulted in a helicopter rescue that saved her life.

On June 30, 19-year-old Chinese tourist Tianqi Li drowned at Patong Beach after going for a night swim with a female friend. His female companion was saved.

In February, 57-year-old Xianmei Wang was found floating off of Koh Hei after drowning.

Thailand is experiencing a surge in the number of Chinese tourists visiting, who now top the list in terms of the number of visitors coming to Thailand.

According to the Tourism Authority of Thailand (TAT), 1,124,234 Chinese tourists visited Thailand between January and June this year, up 28.9 per cent compared with the same period last year.

This year, that figure has been surpassed already.