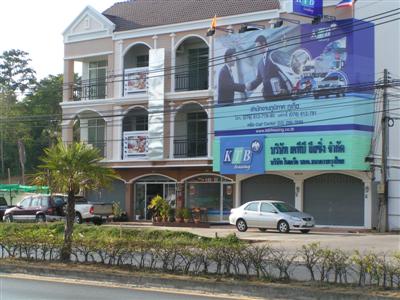 KATHU, PHUKET: Police believe they have identified the killer of Englishman Ian Stuart, who was bludgeoned to death in his bedroom in an office building near the Tesco-Lotus Intersection on February 23.

Tung Tong Police Superintendent Arayapan Pukbuakao said he expected the suspect to be in police custody within 15 days.

The suspect is around 30 years old and lives in Chalong. He is a drug dealer who has been arrested many times, Pol Col Arayapan said.

The suspect is believed to be renting an apartment in Phuket City for his wife, as well as owning a house in Thalang.

He regularly changes residence in order to reduce the likelihood of being caught, Pol Col Arayapan added.

Pol Col Arayapan said police are considering the possibility that there were two people involved in the killing. A cigarette butt found near the entrance to the building suggested that someone else might have acted as a lookout while the killer was inside.

Police are now sure the killing was the result of a botched robbery. They have ruled out a personal or business dispute as possible motives.

Business has been ruled out because the property company for which Mr Stuart worked, St James Property Co Ltd, has an income of around 70,000 baht per month, not enough to justify a killing, Pol Col Arayapan said.

Examination of Mr Stuart’s body and the murder weapon yielded an important clue. Police believe he was killed with a thick wooden plank recovered at the scene. The plank has at least one nail protruding from it.

In addition to severe trauma resulting from multiple blows to the head, Mr Stuart had a nail wound in his hand. This indicates he was not killed in his sleep, but tried to defend himself from attack, Col Arayapan said.

If the killer or killers had entered his bedroom with the intention of murdering him, they could probably have done so without waking him up and causing a struggle.

As for the laptop computer missing from the building, police believe Mr Stuart was murdered after he confronted a burglar or burglars in the process of robbing him.